Kids belong from high-income families do better at both, but researchers not exactly sure why

Kids belong from high-income families do better at both, but researchers not exactly sure why:
New research suggests the income and education levels of parents are connected to a baby's skills with gesturing, which in turn can indicate whether a child will develop strong language abilities."The children who are gesturing about more things in their environment have larger vocabularies later,"
The research doesn't prove that children in less privileged families gesture less and therefore grow up with more limited vocabularies. Nor is every baby destined to follow the general patterns found by researchers." I am not saying that gesture is the whole story," added Rowe, a postdoctoral scholar at the University of Chicago.

While they don't get quite as much attention as words, gestures are also an effective form of communication: Think of sign language, for instance. Babies, in fact, start gesturing before they speak, Rowe said. In the new study, Rowe and researchers examined 50 children from the Chicago area when they were 14 months old and then again at 4.5 years. The researchers filmed 90-minute videos of the kids interacting with their parents at home for the first session, and tested their vocabulary in the second.
The researchers found that the level of gesturing at 14 months is linked to the vocabulary level at 4.5 years; the income and education of parents also played a role. For instance, during the first session, the children from high-income households gestured 24 times, compared to 13 gestures from kids in low-income homes. And when both groups were tested for vocabulary, the kids from the high-income families scored 117, compared to 93 in the other group.
Spencer Kelly, a gesture researcher and an associate professor of psychology at Colgate University in New York, said children from more privileged households might live in homes with more objects, such as toys and furniture. As a result, they may "provide more opportunities for parent and child to use gestures when talking about things."
It's also possible that the children might have more opportunities for activities with their families, because there may be fewer children and more free time, Kelly said. "Much research has shown that these sorts of social activities help children learn language."
Why does all this matter? "Above and beyond what children and parents say with their words, what they do with their hands is important for how children develop language. These results fit with recent research demonstrating that hand gestures enhance learning and memory in educational contexts, such as gaining new math skills or acquiring new words in a foreign language.

What is your thought

One thing I do remember is that people in generational poverty are not very specific with their vocabulary. If a child drops a fork, generational poverty parents would most likely say "Pick it up!" or "Pick that up!" Parents of middle class would also say this but would also say "Pick the fork up off the floor." Middle class parents use more descriptive nouns. It's hard to find a gesture for "it" or "that."

Although Ruby Payne doesn't talk about gesturing, I suspect that gesturing is related to the size of the parents' vocabulary strongly influences the amount of gesturing the parents. That's just my assumption but it is a logical one to me.

As educators, if you have not read Ruby Payne's book, you should. She wrote it to help teachers understand students from generational poverty. Reading the book helped me understand my students' struggle with standardize testing, telling a sequential story, and lack of common vocabulary. It's an excellent book for educators.

Permalink Reply by Ian Carmichael on March 5, 2009 at 3:37am
YES! More power to Payne's insights. She also speaks about stimulation and engagement, lower visual acuity in darker surroundings as may occur more often in generational poverty. There is often less personal contact, and so less opportunity of learning of anything to be mediated. I cannot speak too highly of the usefulness of this material.

Permalink Reply by Nancy Bosch on February 28, 2009 at 5:31pm
Malcolm Gladwell has a lot of interesting things to say about student differences in his new book Outliers, not rocket science but interesting.

Permalink Reply by Maria Fleyshgakker on February 28, 2009 at 8:06pm
Many years ago, when my first daughter was born and I was reading many books on how to deal with this little creature, I ran into one book that explained that the speech and gestures control are located in the same area of the brain. It was noticed very long time ago that babies who pick up things with their fingers speak earlier and better than the babies who grab the toys with the whole hand. This is why ancient people created those games with the babies' fingers. Those games developed the child's speech area of the brain. While playing with the baby's little fingers, massaging them and singing itsy-bitsy spider song you really develop their speech area of the brain. 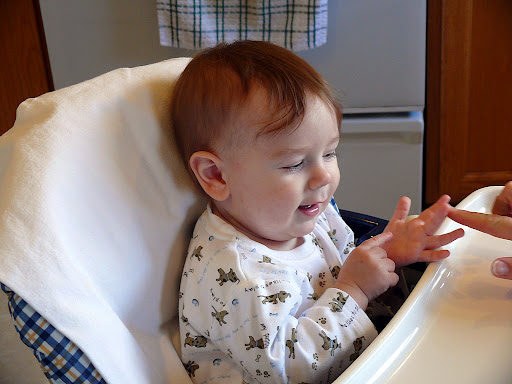 Now about the money. In poor families children are cared for differently: less time is spent on games and conversations because parents are working 2 or 3 jobs, don't see the kids as much as the wealthy parents, who would hire somebody to spend time with the children if they cannot be there themselves.

Permalink Reply by Nancy Bosch on March 1, 2009 at 7:06am
...and in contrast to what kids living in poverty don't have it's what kids in affluent families do have. They have the opportunity to experience travel, theater, museums etc. They participate in opportunities for kids like enrichment classes, drama clubs, and special sports coaching. I teach gifted kids and I am always suprised at the difference in what my middle class/upper middle class kids know that the 'blue collar' kids don't. It's a level of exposure that takes place in the family.