The second week of a new semester is almost here and we are well into the grind again. I only put in nine or ten hours left work early daily this past week and it was wonderful to have a life. I think I preserved some of the precious energy reserve I gathered during the short break. But now I must work today — Saturday — or have misery and gnashing of teeth next week. Frustration! I’m sure the other educators out there can relate to that from your own experience.

Two Tech Trainers? Or Is There An Echo In Here?

Lately I’ve discovered there are at least two educators or consultants calling themselves ‘Tech Trainer’ besides me, and one of them is in the Denver area, just 60 miles away. (Although in the global web2.0 world, I suppose physical proximity doesn’t matter at all.) I am not surprised that others are using this nom de plume; after all, it’s now obvious to me that it’s too generic. But they weren’t around a few years ago when I was starting my first web site with that name. Now I feel I must… Continue

Posting GoogleDocs to The Web

I was excited to find this article at one of my favorite blogs, Lifehacker, because my students are just getting into Google Docs and I know there will shortly come a day when we want to publish their Google Presentations to more than just each other.

To embed a Google Docs slideshow you will just open the presentation, use the Publish tab and paste the code into your web page. It will look a bit like an embedded YouTube video. Lifehacker also enumerates a few of the other new… Continue

I’m blogging from my phone for the first time so forgive me if the coding on this post works strangely. I can’t get a preview…

My students get a real kick out of Gizmos and Voki — talking, animated avatars you can post on your blog, web site, or MySpace — they’ve even had their avatars ‘present’ segments of material for them at the end of a unit. That’s why I’m going to try PQ Talking Photo. It looks like great fun. They’re running a free software offer right now for bloggers. Here’s… Continue

Golly, neat! My real-world friend mentioned a web tool yesterday that I’d heard about in the blogosphere just that morning, and that she’s actually used it (Charity Navigator). So what, you say? Well, it’s not that this tool is any more spectacular than so many others (I like Charity Checks myself). Millions of cool sites come online every day. It’s not that my blogs are so up-to-the-minute; of course they are! I am a brilliant, discerning reader, you know.

Well, the lab is empty, we’re all on Winter Break, and I am in the midst of processing my thoughts about the collaborative blogging we did with Mrs. Hill’s classes in DuBois, PA. I want to thank her publicly again for her willingness to participate with us.

I would do this again with some caveats. Remember that I teach technology electives, not a content class. I center my units around the subject matter and standards the children study in their other classes while I’m (hopefully)… Continue

Has Teaching Lost Its Magic?

Happy New Year! I hope you (all 5-6 readers–LOL) had a good Christmas and are enjoying your break from the routine. It’s flying by way too fast, isn’t it? Even so, I hope you are enjoying family or friends and unplugging just a bit. Personally, I’ve welcomed this time to catch up on my personal interests while completely ignoring my job responsibilities. What a blessing, too, that I have been getting more sleep and moving at a leisurely pace for once. I love being able to run out to coffee with… Continue

I’ve been sitting in Starbucks since 5:30 a.m this morning. I decided if I was going to be up, dressed, and working, it may as well be with good coffee and free WIFI. I’ll head off to work proper about 7:00.

I’m very excited about a new project I am doing in Think.com with my friend Nicole, a new, enthusiastic, and creative middle school teacher from Pennsylvania. We each have six computers/communications classes, so we are pairing them up for blogging and commenting. I think the… Continue

flying pigOnce again it's been a long time between posts but today I have some fun things to share. Before we get to that, let's just say I've been consumed lately by grading final projects (our first digital stories!), starting fourth quarter, learning a bazillion kids' names, training them in my lab's minutiae, preparing for state high-stakes tests, administering said tests, and so on. I've had the never-ending respiratory crud and fevers, too, but showed up for work anyway. Because you… Continue

I’ve come to the conclusion that I spend way too much time online. Some of it’s for work, some of it’s for fun, and some of it is for professional development. Some of it is very valuable, some not so much. It’s starting become like the TV or the phone were in the past - another way to stay over-busy, distract myself, avoid other things. It doesn’t keep me in the house, now that I have a great laptop, but it keeps me unavailable for other important activities that could engage me in a more… Continue

Here’s a middle-school-friendly presentation on blogging that I use with my students prior to their first post. I gathered the resources from several places and have noted those within the show. I hope it will be helpful to someone out there.

More About Transparency and Online Presence

Since my last post I've come across so many articles and blogs about our online image, appropriate levels of disclosure, and unintended perceptions that I realize I have nothing novel to say about these issues. All I have is questions. (This happens more often than not and it’s the reason I didn’t start blogging until a few months ago.) This morning in my aggregator Miguel Ghulin brought the issue up again. You should stop over to his blog, Around the Corner, and check out his post,… Continue

Who is Your Audience and How Much Will You Tell Them?

This question has been simmering in my head the last several days because of some news and blogs I’ve read recently. Consider these recent headlines:

Fired! EFL teacher loses his job after employer finds out about his blog.

Discovery Education, often times better known as United Streaming, is far more than simply a website with streaming video content. It is an entire network of resources, from video clips for students K-12 to blogs for educators. Discovery Education provides a way to engage today's multimedia students with rich video and other classroom resources. Teachers can customize and personalize lessons plans using an interactive World Atlas, an enormous… Continue

I read The Starbucks Experience last year, and I was amazed at the principles this company uses to connect with their customers. They want to become the "third place" in a person's life, right after home and work. They aren't selling coffee -- they're selling an experience. Yes, the coffee is good, but there's great music, comfortable seating, environmentally-conscious cups, and trained baristas, as they're called.

Which makes me wonder -- What place is school? Are we… Continue

Well, I am feeling a little overwhelmed. I remembered my professor mentioning that it would be a good idea to get involved in some technology-geared organizations, go to some conferences, and that there was a conference in San Antonio this year. I came across the classroom 2dot0 local workshop site and saw the NECC in SA again. I figured that I'd probably need to look into registration and such, so I filed in my 'Spring Break to-do list' mental file.

Cut to today with me finding the… Continue

Oh yes! Oh yes! The Web 2.0 app I've been waiting for is now Web 2.0, free and online. It's Photoshop Express! (Sign up fast to get the personal URL of your choice. :) 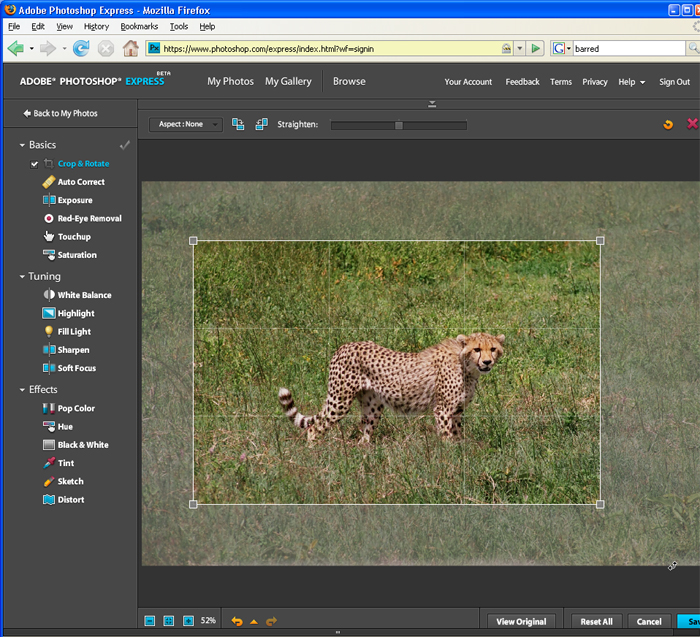 It's beta and undoubtedly new features will be added, but right now it lets you upload photos, crop, rotate, retouch, etc. The interface seems very intuitive (compared to Photoshop or the Gimp) And, of course, optionally,… Continue

Noodletools assists students in research with a variety of functions including search tools, note taking tools, and in making MLA or APA style bibliographies. With both subscription and free versions (the free version does not include the note taking cards including in the subscription service), the tools step students through the research process in a way that a typical search engine cannot, including guiding students in how to select a research topic,… Continue

I am very interested in using some of these web 2.0 tools in my classroom. Since U.I.L. and my TAKS test are over, I feel like I can try some new things.

This is my first new thing. Blogging. I read blogs almost daily. We have started a "blog" somewhat I guess with the shiffhappens wiki. At any rate, this is my trial to see how blogs can be used creatively in education.