The Learning Tour of PISA

The word of education is awash with data – particularly testing results. While I personally have significant reservations about both the use and usefulness of much of this data, due to a combination of   the harm it can do to students, teachers, parents and schools as well as the often unsound assumptions upon which it is based, it has to be acknowledged that not everyone shares my views.  However, I will  put my concerns aside  for the moment and share this video explaining the biggest…

Organizing the Wealth of Resources

I check email on vacation. I leave the technical emails alone but, while my hubby reads the newspaper, I enjoy reading the blog subscriptions that come to me by email. This summer, posts from educators like Cool Cat Teacher,… Continue

Cheers! Here's to my first blog!  I am an early childhood educator of preschoolers assessed with needs in developmental areas. I would like to begin or join a blog to enable communication amongst parent. As the school year begins again I will begin my blogging on my school districts web page.  Any ideas on getting started or getting parents enthusiastic?  i would like to provide a continuity of pleasurable… Continue

Christopher Johnson’s new book, “Microstyle: The Art of Writing Little,” reviewed yesterday in the New York Times, is a “guide to verbal strategies that make very short messages effective, interesting, and memorable.”  ‘Big Style,’ (a term the author uses that roughly equates to what my father calls ‘the grammar police’) confounds the set of necessary rules that allow readers to make…

I’m excited about this year’s Campus Technology conference for several reasons. In addition to the usual variety of Break Out Sessions, and Technology Seminars, there’s an opening keynote by Michael Wesch (known to many through his wonderful ”…

How to win the "best schools" race - don't play the game!

A week ago my knowledge of the education system of Finland was, to be honest,  almost non-existent.   I knew that they were consistently ranked number one of all “Western” countries in PISA testing but had no idea how they did it.  Then, last weekend, I attended a keynote address by Professor Teemu Leinonen, Professor of New Media Design and Learning at the Media Lab of… 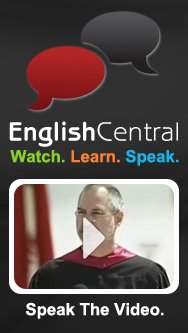 As an "insider", I'm privy to a little of what is going on at EnglishCentral.  The team has really been working overtime and coming up with some fantastic changes that will be in a new release.

Next Saturday I'm doing a presentation abouit QR Codes in T&L at the free online conference the Reform Symposium ...

My session is midnight Thailand time ... but much more sensible if you are in Europe or the Americas ... it is 10:00am California time and 6:00pm in London

I recently read a post from Andrew Marcinek, an educator who I greatly respect and often agree with. Are We Chasing Technology or Mastering It? His post however caused me, for the first time after several years of connection, to disagree with him. In his post he asserts that we…

This blog post saw a lot of traffic yesterday when I put it up, so I have to assume the interest level is high - figure'd I should share it here too! - KW

A mix of web apps that can help you make presentations that are fun, eye catching, and engaging (great for students too)!

I have had my enthusiasm for ICT refired by this course and find myslef once again using tools that I have not used for a while - eg podcasts. The use of Skype is a good one, but is affected on occasion by issues of speed (bandwidth) here in Melbourne! We seem to have a very slow boradband here in Australia. BUT I do use it when needed. It does open up my students to global points of view.

Hope you all have found the course as enriching as i have!

The Chrysalis community learning centers project in Africa has been launched within the framework of the capacity building for the Education For All (EFA) program with the financial and moral support of UNESCO.

The objectives of the project are among others:-

“Capitalism is the worst economic system in the world – except for everything else we’ve tried.”

Ambient Insight, founded in 2004, is an international market research firm that uses predictive analytics to identify revenue opportunities for global eLearning and Mobile…

Here's a cool article on Facebook and personal branding....

THE AFRICAN YOUTH AND SUSTAINABLE CONSUMPTION

Young people make an important target group within the demand side in this consumer society and play a determinant role in future consumption patterns. Yet they are not given the special attention they deserve when considering consumption patterns. In most cases they are regarded as ‘victims’ of contemporary consumer culture.
However, while some young people are more concerned about the future of the earth they will inherit, some others are taking initiatives in proposing alternatives to… Continue Drowning in the Sea of Technology

For the past few weeks I have been trying to keep my head above water in the gigantic sea of technology that is available to teachers and students. It's almost more than I can handle. It is no surprise that many teachers get frustrated and don't want to make any changes to their daily routine by including technology. I have always been able to work through technology to figure things out, but I know there are those out there who hit the first stumbling block and give up. There is just so…