This Friday when one of my colleagues was looking for a good 2.0 program to use with her digital photography class, she looked a Flickr, I guaranteed it world be blocked in the Ohio K- 12 environment, it was, and then suggested she look at Voicethread. Reluctantly she agreed and discovered this is a nice bit of software. It encourages storyboarding and reflective writing by its nature and…

We Made it to Wikispaces! - Yeah!

Students in my fourth and fifth grade Integrated Technology classes now have their own secure wiki webpage at wikispaces! Students have a secure place to learn and share. For now, members only in this cyberspace - only our teachers, students and their parents may enter. We monitor the site daily and I am already finding that students writing in their spaces at home too!. Students are incorporating safety and etiquette rules that they have learned to create the first pages. Soon each…

Yesterday I spent the day at Copper Hills high school at the High School Progress Team meetings. I have been involved in these three-time-a-year
meetings for the past three years, and, although I don't like to leave
my classroom in the hands of a substitute teacher, they are really
productive.

I've posted this on my blog, but thought people in the greater Classroom 2.0 community might find it useful, too.

The latest site I've learned about is called Asterpix. It allows you to take any video posted on the Internet and easily create "hotspots" in it that allow viewers to click on it and get more information. Here's an…

For several months now I've had a site dedicated to making Free Libre Open Source Software (FLOSS) information available to folks that might need it. It's located at http://toss-elptx.blogspot.com/ - The Texas Open Source Software contains not only links to equivalent sites (open-source sites for proprietary products,) but if you look around, there are references to sites providing .iso images for Macs and PCs, as well as arguments and… Continue

Who do you want me to be?

That’s what my oldest daughter asked me today. It was a question that came during a heated discussion.

Each of us has had those moments when we wish someone would just tell us how to act or what to do so we could do it and avoid the difficult journey in discovering for ourselves who we are. As an
educational leader and school administrator, I’ve had a few moments
like that over the years. “If someone…

This has also been posted on my blog:

It's time for the first "ELL, ESL, & EFL Carnival," where teachers and others have submitted posts that they thought were particularly helpful and insightful in teaching English as a Second Language.

And a pretty impressive batch they were (and are).

I'd also like to propose that we do this Carnival bimonthly -- more or less. Which means the deadline for the next one would be…

My friend, Bonnie, and I are presenting at this year’s K12 Online Conference and we hope to show folks how we used the tools of Web 2.0 to create a learning environment for other educators as part of our Collaborative
ABC Movie Project. We’re a bit mystified about how the conference will
go but we are confident we can handle it, and already have some great
ideas brewing for folks who “attend” our virtual workshop.…

Here’s a web tool that may have many applications in education. Stained Glass collage allows the user to create a stained glass style picture using pictures from Flickr or pictures that you upload
yourself. The program then creates a stained glass style collage of the
pictures you selected. The user can choose what section of a picture to
use, the size of that section, and orientation on the page. You can
also choose the size and color of…

Check out the k12 Online Conference! 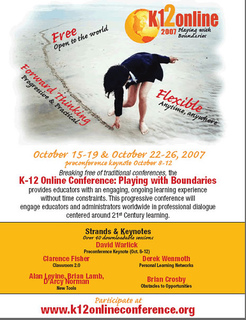 Bring in Video, Images, and Text onto your 3D Whiteboard with Edusim !

Halo 3 launch musings - games for school and a contest!

Hi Classroom 2.0'rs-
For your Friday persusal, I offer you my latest blog musing:

Did you know:
Continue

Tell me what you think of my Comic strip creator in Flex.

That's an early version, I am still early on in my learning of Flex. This was inspired by an ajax version at witty comics. Slow loading, I know. I need to spend a bit of time optimizing all these images as much as I… Continue

How can web 2.0 tools empower research in a collective setting?

On Monday during our department meeting, the entire department began a discussion of how we should implement more appropriate technology to improve student learning. Every member of the department is excited about ways that technology can positively influence students. What a great start as we begin the new year. We are now looking for ways to demonstrate to our administrators that what we are doing is helping students learn science better.

Coming back to teaching

I spent 13 years between teaching middle school and high school, as well as some adjunct work at the graduate level. For the last two years I have focused on working in my field, but now I am ready to come back to teaching - not full time, but as an adjunct professor. I find I really miss the interactions found in the educational environment, and I really miss working on curriculum and thinking about how to best structure activities for learners.

I don't regret taking some time away… Continue

About my current project...

I guess I should write up a brief description of this project, especially if I'm going to blog about it!

The major concept is that students will take on the role of newspaper reporters, and write articles about a given area of World History (I chose Ancient Rome for this first project). They will do their own research, and publish their articles on a wiki. I came up with 35 different articles that students could write about, and created wiki pages for each of them. Students work in… Continue

My impressions from the rest of the day:

By 3rd period, the kids had discovered the mail function. This was no surprise, as those kids are particularly social. No big deal, I'll just have to keep an eye on them to make sure they're getting their tasks done.

My 5th period has a few groups that are really struggling with the overall concept of the project. Some of this may be due to the higher percentage of ESOL students, but I don't think that accounts for it entirely. I may… Continue