When I was six I taught my neighbor who was seven to ride a bike. Years later, as a teacher of six-year-olds, I watched as my students taught others in their class. They even participated in conferences with me; thus, our audiences learned lessons from children. Now, the Internet allows viewers all over the world to witness the teaching ability of students. We can see for ourselves what… Continue

If YouTube is blocked at your classroom, you can watch Iain's video on SchoolTube.

11-year-old Iain Coates shows off his stuff animal peniguin collection, plays the cello, talks about paleontology and his other… Continue


TEDxRedmond is "by kids, for kids" with a theme of "Power to the Students." With over four hundred youth attendees watching in the all-youth theater, this was one of the largest TEDx events entirely for youth. Organized by an all-youth committee headed by former TED speaker Adora Svitak, TEDxRedmond focused on issues (like education) pertaining to youth as well as adults.


Amazing-Kids News Reporter Olivia sits down with Adora Svitak, host of TEDxRedmond 2010, in the Microsoft Convention Center during the dinner that was provided by BING for all the attendees and speakers.

TEDxRedmond Conference Brings Some of the World’s Youngest Artists, Writers and Musicians to Speak on Microsoft Campus

Organizer Adora Svitak says she hopes to empower and inspire attendees with a conference organized by kids, for kids. Read Story


Adora Svitak, 12, is the host of TEDxRedmond, a local TED program that is being organized "by kids, for kids" that will be held Saturday September 18 on the Microsoft campus in Redmond,…


Adora Svitak, 12, is the host of TEDxRedmond, a local TED program that is being organized "by kids, for kids" that will be held Saturday September 18 on the Microsoft campus in Redmond, Washington. Follow on Twitter.

In her interview, Adora explains what TEDx is, how she got inspired to set-up her own TEDx event and some of the issues she has run into… Continue

Adora first became known to the public when, at the age of 6, she was recognized on local news in Seattle for her writing abilities.

Adora became an object of national interest at the age of 7 when she appeared with Diane Sawyer on Good Morning America. Her book Flying Fingers describes… Continue


What advice do you have for high school senior and 2010 Mason County Forest Festival Queen, Taylor Robecker, about becoming a middle school… Continue


At the 2010 U.S. Imagine Cup Finals in Washington D.C., 10-year-old Brennan LaBrie, TIME For Kids, interviewed Siegfried Behrens, Microsoft General Manager, U.S. Education, about the role technology will play in the classroom of the… Continue

I'm seeking virtual youth reporters to interview Youth Ambassabors and Youth Olympic athletes using Skype, webcam, VodBurner, a video editing program and that has a SchoolTube or YouTube account. Online instruction and support is available on a private ning network.


Using the Skype video recorder from VodBurner, I conducted a face-to-face interview with Erin Kennedy,… Continue

SPEAKING HIS MIND: Marcelas Owens Speaks Out for Healthcare


History was made last Tuesday when President Barack Obama signed the healthcare bill into law.

Cub reporter, 10, to report on Winter Olympics in Vancouver

PORT TOWNSEND, WA -- He's Brennan LaBrie, kid reporter, a title he takes seriously -- and next week he takes it all the way to the Winter Olympics in Vancouver, British Columbia.

At 10, LaBrie is the youngest reporter in the world known to be covering the 2010… Continue

An Interview with Team Awesome Filmmakers

A good movie takes good teamwork, and a team of young filmmakers who are strong believers in teamwork are currently launching a filmmakers co-op just for that reason. Mike Denman and Aaron Anderson, both based in Seattle, started Team Awesome for both "filmmakers and non-filmmakers," as Denman said.…


This morning at 8:30am (PST) I'll be talking with Trent Mitchell, Video Production Teacher at Seattle Shorecrest High School about how his 4th period class made the above "Hey Ya - Music Video".… 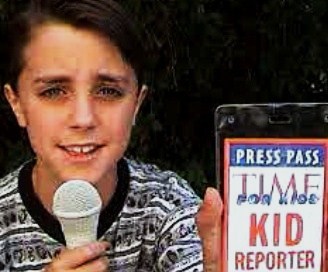 This morning Brennan LaBrie, TIME For Kids - Kid Reporter, will be on NPR Weekend Edition Saturday with Scott Simon.