As of this moment, according to the ISTE2011 Conference ning, there are 17 days 14 hours 4 minutes and 8 seconds remaining until the conference convenes at the Pennsylvania Conference Center in Philadelphia, PA. My contributions to the event mostly center around the SIGVE Virtual Environments Playground, but I'll also be on two panel presentations, one…

Please help yourself to a good read...

The first edition of ISTE SIGVE's Virtual Education Journal (VEJ) is online and available for your reading pleasure. Please visit http://issuu.com/edovation/docs/1st_vej_may_2011 to read it or pick up on on ISTE Island in Second Life to read within SL.

It's just beautiful! Thanks to Rosie Vojtek and Bob for their tireless work on it! And we'll see you all in Philadelphia June 26-27 for the SIGVE Virtual…

Completely self-serving and proud of it, I want to share a 3 minute video at http://contest.ovationguitars.com/users/showprofile/46525651 that might fetch me a new guitar if I can muster enough votes. FYI, I recorded the "how to tune in Open G" lesson in one take using my much-loved Gibson SG Standard, which bears signatures of Scotty Moore (Elvis's lead guitarist) and others. There's also a signed pic of Scotty in the… Continue

Hey, all, I'm a K-4 technology coordinator at University School of Nashville and I've been asked to take a myopic look at my keyboarding instruction philosophies. if you are knowledgeable about your schools touch-typing instruction program, could you take a minute to fill out this VERY brief survey? I'm out to gauge current trends and could certainly use the help...…

I had the opportunity to view the pre-broadcast version of the fantastic years-in-the-making PBS "Digital Nation" program yesterday and I'm doing all I can to get folks to view and to contribute to what will undoubtedly be a rousing discussion of its implications for those of us who have "drunk the koolaid" as innovators and advocates in the field of educational technology.

Hey, all,
Discussions are still underway about the scope and mission of the newest Special Interest Group at ISTE, but I'd like to welcome you to join in to any degree your already busy schedules will allow. As you'll note, we're looking for participants who may not even be ISTE members (yet) but who are experienced and/or interested in virtual worlds of any ilk. I can let you know that what was formerly the Second Life Playground at previous… Continue

"How I Spent My Summer" Will Inspire

Some of you may know through fb or twitter that my godson, Seamus, underwent brain surgery this past summer to remove a malignant tumor from his cerebellum. He is manfully struggling back from it and has to date regained much use of his right hand, tentative freedom from the walker, and his ability to speak. His "new" voice is a different one than his pre-surgery one, and its timbre belies the brilliant, sardonic wit he inherited from both his parents.

I've been away a bit, laid low by a bad bad chest cold and back trouble, all at once, and I am immensely aware of my mortality. While I've been down, I've been delving into a really remarkable tome suggested to me by friend Cathy Walker of MUVErsLLC, Jump Point by Tom Hayes. I refuse to review it before I have finished the whole thing, but wow, why on earth did that book not cause the kind of stir rukussed up by The World is Flat, or Here Comes Everybody?… Continue

Hey, just back and decompressing from NECC09 with a veiw toward NECC10 in Denver. I posted typically rambling thoughts on what I believe is an important topic at http://scottmerrick.blogspot.com/2009/07/on-mall-on-4th-of-july.html on the 4th and would appreciate your input if you are an ISTE member, a Second Life educator, and would like to contribute to the discussion! Thanks in advance!

Hey, ya'll. Just want to toss out there that one of my favorite networks, Second Life, will be getting a lot of attention at ISTE's NECC come June 27-July 1 this summer.

I'm helping facilitate two 3-hour workshops on the topic, a 3-day running Second Life Playground, and a Birds of a Feather. I'm also helping put together a BOF on the topic of my favorite new VW for kids, Quest Atlantis: I'll be a bizzy bee, for sure. You can see (and register for, if you wish!) all our workshop and… Continue

If you're in the region and this looks promising to you, please attend! 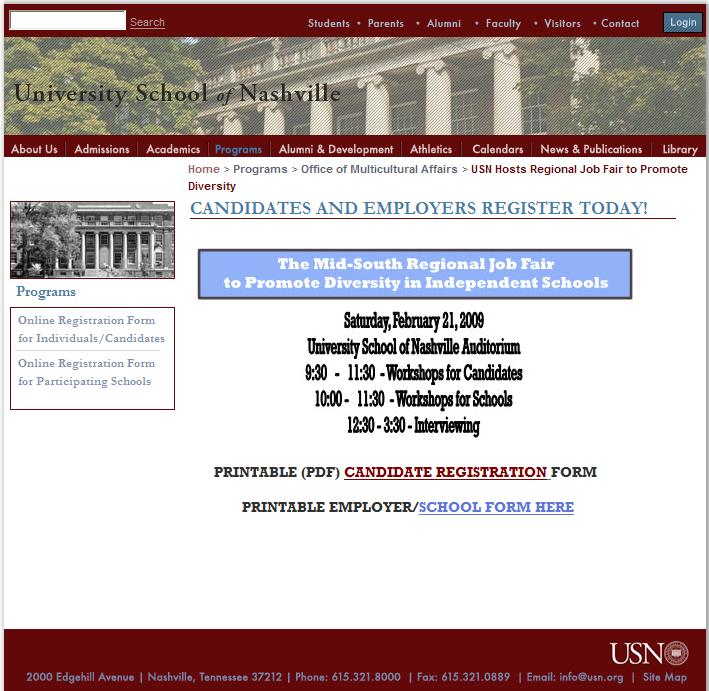 I know, I know: You'll be asked by better friends with better blogs, but I'm not above begging. :)

You really want to click the button that says "Oh! Virtual Learning!"

LIve Streaming from SLCC in Tampa!

Hey all, i'm streaming in two places all day from Tampa, FL at the Second Life community conference. Visit my SL blog at http://scottsecondlife.blogspot.com for all the urls, plus SLurls for the inworld streams from the veodia.com feed.

A Great Talk with Steve Today!

I'm almost done with a whirlwind week exploring Web 2.0 with my 6 public school teachers and my own school's marvelous Director of Multicultural Affairs. The crowning moments of today featured a Skype chat with our own founder, youknowwho. I added it to my Classroom2.0 Videos, and here's a link to that :) Steve has some very very interesting things to say about Web2.0 and our ongoing efforts to define and deal… Continue

Chatlog from Will Richardson's TAIS08 session on RSS--from ustream.tv

This is up and online and embedded at my blogpost at http://scottmerrick.net. I'm posting the text chat here so Will and others can see the robust conversation that went on in the backchat. Life is good:).

Yup, friends, it's a happening thing: The wonderful workshop I piloted last summer for one week is going on the road. I only have the last 4 weeks in July, but I'm hoping to spend it working with small…
Continue

7th Graders Work It Out Wiki-wise

If you want to see a neat discussion on Joel Bezaire's USN 7th grade pre-algebra wiki, go read this! Joel sent the link to me in an email and says, " ...check out a recent "discussion" we had on a difficult Problem of the Week my kids were working on. Exactly how I envisioned this being used, and a bunch of kids who didn't comment on the page said they read the comments and found them helpful."…

I'm stumbling through my second week of school with a lab full of new computers, hammering out system tweaks like a troll with a chisel, one computer (of the 21) at a time, and I hope this will help explain my silence of late. Going back to our summer workshop wiki reminded me that it's all worth it, and the revisit inspires me to work on an article this week to publish and share out what I think is a solidly replicable model for encouraging…

Well, our "Web 2.0 for Us" workshop (thus renamed in its PowerPoint title slide 10 minutes before the first minute of the first day's work) is completed, but after some enthusiastic shareshare from t…

Well, our "Web 2.0 for Us" workshop (thus renamed in its PowerPoint title slide 10 minutes before the first minute of the first day's work) is completed, but after some enthusiastic shareshare from the 10 participants the last hour or so of the weeklong experience, I'm hopeful that like all good discussions, it may well never end...