Last Thursday evening I was at home with my wife in our small kibbutz apartment when my cell phone gave a loud ring. The incoming number was from the Tel Aviv area – not an expected call. The recorded voice on the other end set me scurrying! "A terrorist incident is taking place on the kibbutz. There is shooting and wounded! All residents are to lock their doors, close lights and stay close to the walls or floor! Further instructions will be provided later". A few minutes later, my wife's cellular rang with the same message. We quickly complied with the instructions. We have been living on Kibbutz Kfar Etzion, 20 kms. south of Jerusalem for nearly forty years and never had we experienced a terrorist attack on the kibbutz. Of course, we have carried out civil defense drills where we had to enact what we would have to do in case of a terrorist raid, but we had never experienced the real thing.

Our daughter called from her apartment on the other side of the kibbutz, home alone with six of her kids. She wanted to know if we had heard any details about what was going on. We hadn't. There we were sitting in the dark, waiting to find out what was happening, worried that perhaps armed terrorists were roaming free in the kibbutz looking for prospective victims to execute or hold for ransom. Two of our other sons were probably out on the paths of the kibbutz with the intervention squad trying to locate and intercept the invaders. I went into the spare bedroom, unlocked my M-16 assault rifle (which are issued to kibbutz members who have served in the armed forces for guard duty and use in case of security emergencies) and removed it from the closet, just in case.

The light from my PC LCD drew my attention. I glanced at my open Firefox browser, there was my Twitbin collecting twits from all over the Twit-universe; Business as usual, new applications, blogposts, chit-chat and what have you. And here we were in locked in our apartment being stalked by terrorists whose hatred is driving them to attempt to take our lives. I felt an urge to call out to those tweets who I follow (and some who follow me) to tell them about the mortal danger confronting us. So, I sent out a Tweet Shout – "REAL TERRORIST ATTACK ON KFAR ETZION NOW!! Shooting and wounded!!" In a few minutes I got replies from Susant and Paulhami expressing their empathy and concern. Another twit by me: "We are at home with doors locked – patrol engaging terrorists with live fire!" and another batch of twit replies sharing prayers and hopes for our well being. It made things better for me knowing that there are people out there with whom I collaborate and communicate who really care about our welfare. Our prayers to the Lord were joined by others around the world.

Susant's and Paulhami's later reflections were also quite interesting. Who are our neighbors in this global world? Whose welfare is meaningful to us?

As time went by we were informed about the nature of the terrorist attack. Two terrorists had cut the perimeter fence and entered the kibbutz. They made their way to the compound of the Makor Chaim Yeshiva High School on the kibbutz and entered the library. Armed with long knives and a pistol, they came upon seven HS counselors who were meeting in the library. They confronted and threatened the counselors, ordering them to stand against the wall. It took the counselors a few minutes to realize that these two figures dressed in army fatigues were terrorists and not guards, but once the realization came, they pounced on them, disarming them. During the scuffle, two of the counselors were wounded by the knives and both of the terrorists were shot and disarmed.

The outcome of this attack could have been very different had the terrorists entered the Bet Medrash (study hall) which was occupied at the time by HS students instead of falling on the counselors meeting. The counselors are mostly fellows in their twenties, who had served a few years in the armed forces, and who had been trained to react to terrorist attacks.

The Israeli press wrote about this attack along with another terrorist attack that took place at the same time north of Jerusalem, with fatal results.

On the next evening all of the kibbutz members joined the Yeshiva students for Friday night prayer services which were wonderfully festive. The kibbutz Rabbi and the head of the Yeshiva spoke of the great deliverance we had been granted by the Lord at the hands of the brave and resourceful counselors.

The event left me with much to think about individually, locally and globally.

Here are a few images of the twitter exchange which took place during the event. 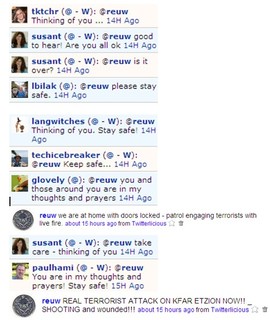 Comment by Lisa Burden on March 4, 2008 at 2:20pm
Many blessings on you and all the kibbutzim.