I recently attended the Moodle Moot in New Zealand and an inspiring presentation by Martin Langhoff. Martin is a Moodle guru and works for New Zealand Moodle Partner, Catalyst IT. During his spare time, Martin is involved in the One Laptop Per Child (OLPC) project. I also had the rare privelege of test-driving an XO-1 prototype.

For those not familiar with the project, the OLPC social welfare organisation developed XO-1, previously known as the $100 Laptop, as an inexpensive laptop computer intended for distribution to children in developing countries around the world, to provide them with access to knowledge. The XO-1 can be sold to governments and issued to children by schools on a basis of one laptop per child. Pricing is currently set to start at US$188 and the goal is to reach the US$100 mark in 2008. The XO-1 device is promoted as a textbook replacement whereby 5 years of school books for a student is the approximate cost equivalent to a $100 laptop. The project targets under priveleged children in developing countries that are a consequence of infrastructure limitations, limited educational resources and a shortage of teachers. 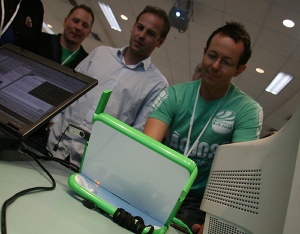 The OLPC project was founded by Nicholas Negroponte from the MIT’s Media Lab and is reminiscent of Sugata Mitra's: 'Hole in the Wall' project where groups of children, given access to shared, public accessible computers in playgrounds and other public areas, taught themselves to use the technology on their own. Working in self-organised groups, and helping each other, the children typically navigated within three minutes and began to browse in about an hour. Within three months, they achieved basic computer literacy, and by nine months achieved the proficiency level equivalent to most modern office workers. They also picked up a considerable amount of the English language from common multimedia software. These results were obtained when the computers were placed in a safe, public location, such as a playground. The same computers placed inside a classroom did not achieve the same results because students do not consider computers in schools as their property or 'play things' because they suspect some hidden agenda on the part of the school.

The XO-1 is much like an eBook, with a sturdy plastic case (predominantly lime and white in colour), carry handle and swivel screen. It has low power consumption, long battery life and is quick charging (10:1 use to charge ratio). The XO-1 has a 1200×900 7.5 inch diagonal LCD screen with two display modes: backlit colour or reflective monochrome for readability in the sun. The device is mesh networkable. It has long-range WiFi (800 metres). It does not connect directly to the internet, but uses ad hoc networking to seek out other wireless devices and use them to 'piggyback' to the web.

With regard to software, the XO-1 runs on a pared version of Fedora Linux operating system and uses a graphical user interface called 'Sugar'. This is detached from the typical desktop metaphor as it is task centric and zoomable. The emphasis is on ease of use, exploration and collaboration for children. Applications include a simple custom web browser, word processor, email through Gmail service, online chat and VoIP programs, several interpreted programming languages, a musical sequencer with digital instruments, audio and video player software.

Interestingly, Steve Jobs had offered Mac OS X free of charge for use in the OLPC program but the offer was declined. According to Seymour Papert, a professor emeritus at MIT who is one of the initiative's founders, the designers wanted an operating system that could be tinkered with, therefore Linux was chosen.

In terms of the XO-1's hardware; durability and low maintenance are obvious. There are no moving parts, it is shock and water resistant. It does have a built-in video camera and speakers, microphone, stylus, USB and SD card slots. Other specifications include 433 MHz AMD CPU, 256MB RAM and 1GB flash storage. The device is functional, but understandably at $100 per unit, it is not over-resourced with its hardware, software and features. Needless to say, it is a marvelous initiative that will help to reduce the educational resource disparity between developing and developed countries.

Sadly, with other players entering the mini-laptop market, including the Intel Classmate PC & ASUS IEEE PC, Negroponte's dream of a $100 laptop for the undeveloped world may never be truly realised. Projected sales for the device were forecast to be 10 million units by 2008, but actual sales have totalled little more than 0.5 million.

If you would like to read more about the OLPC project or make a donation, go to http://www.laptop.org/ 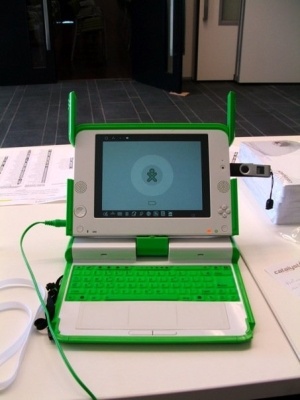