I recently came across a really good post by Steve Dembo (Teach42) titled: My cell phone can beat up your laptop." It's a great write-up about his most recent cell phone (no plug for the Nokia N95) and the many applications for both teachers and students. In the process, he explores the many many applications for cell phones in the classroom. I was fascinated by the brief references for applications like Google Maps, Geo Caching, Live Broadcasting with Qik and Ustream, music apps, astronomy, Second Life through Vollee, and yes, even fitness.

Of course, as many of you know, I recently received the iPhone 3G for my 40th b-day which I made no secret I wanted really bad. I love the iPhone 3G. While it does have some drawbacks, namely, it can't do video recording or streaming... Nonetheless, it's perfect for me. And along that note, I commented back to Steve with the following:

Steve, Thanks for the post. I was windows based mobile phone user for a long time and mobile apps have always been a play with the pc end. I think you have captured a great many uses for mobile technology in the classroom with existing apps both free and pay. I finally made the switch to the iPhone for many reasons that I absolutely love - especially the app store. There are tons of tools for educators and web 2.o evangelists. I will admit that the cut and paste feature which is native to everything known to man is a draw back along with the lack of video capabilities for live streaming or chatting and eveything else, but I’m certain apple will get there in there next version. I don’t think it’s a mobile phone war that is to be had, I think it’s a mobile phone use in education. I’m sure someone will come post a blog about the many uses for the iPhone in education. Thanks for sharing, you have great applications for mobile technology.

Thanks for taking the time to comment! I hope I didn’t come across as anti-iPhone. That wasn’t my intention. It’s a great device and by far the best browser currently on the market. However, I do feel like many people just assume that the iPhone is without a doubt the best phone out there, and it may or may not be depending on your needs. For me, at this moment, the N95 suited me better. Who knows? Maybe with the next iteration, I’ll be switching camps. I try not to get too attached to a piece of technology.

As to “I’m sure someone will come post a blog about the many uses for the iPhone in education”…. Why not take a stab at it yourself! Love to hear your thoughts… 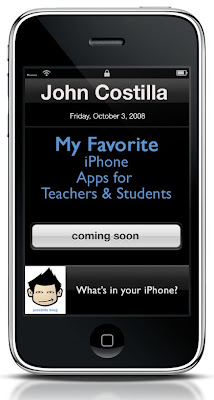 Okay, so here comes the challenge, and I know I set myself up for it, but I'm very excited to step up to the plate. You know what happens when "you assume?" So in the weeks to come, I am going to look at the more than 80+ apps I have downloaded and explore those that would be excellent to use for teachers and students. This is a fun project that I am looking forward to and I know someone out there has already or will be doing the same. That's okay. It will be great to get multiple perspectives and thoughts on pdas/mobile technologies in the classroom and beyond.

Steve, thanks for the action item and look for my "iPhone can beat up your laptop" post soon... In the meantime, for all you avid iPhone users, if you have any app that you enjoy for yourself or use with your students, please let me know.

Comment by teach42 on October 5, 2008 at 9:17pm
I'll be looking forward to reading it! I had an iPhone for a little while and thought that the community apps written for jailbroken phones had some potential. Unfortunately, you couldn't realistically expect schools to go that route. Now that the app store is around, I look forward to hearing what you discover as you sift through the seemingly endless supply of apps that are out there.

Comment by John Costilla on October 6, 2008 at 5:55am
Teach42 - yes, it's rediculous. Most of them are free, some are... well, pointless (zippo) and some are amazing. (airsharing) Thanks for the motivation.

Comment by John Costilla on October 7, 2008 at 1:52pm
Very good question... One district that I have worked with has implemented iPods for ESL programs and for teacher use. The nice thing about the iPhone is that the app store programs work just as well with the iTouch. So, if schools could purchase more affordable iTouch PDA devices that taps into the district wifi connection, that could be a viable solutions to support student use for a less costly proposition. I think that for the sake of possibility, there are many more solutions out there that 1:1 laptops. Rache, thanks for continuing the dialogue going. I'm sure others have their own ideas around equity of access.