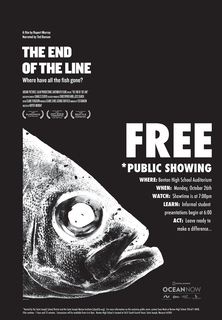 The problem
According to NOAA, over half of the population of the United States lives within 50 miles of the coastline. This trend holds up over the vast majority of the world, and many countries in East Asia show an even greater build up along coastlines. Humans have, and continue to rely heavily on ocean resources for their livelihood. The continued concentration of human life in these areas creates great stress on marine ecosystems. This fact alone is enough to suggest imminent and increased stress on the natural workings of the world ocean. However, what about the other ~50%?

The End of The Line
"Imagine a world without fish" is the tag line that follows the title of this new full length film. The End of The Line made its debut at the Sundance Film Festival in January. The film had its North American premier on July 19, 2009, and continues to play in theaters, communities, and campuses across North America. Screenings this month are scheduled in cities like Anchorage, Alaska and Kamuela, Hawaii. The shows most often on college campuses and at film festivals. In Saint Joseph... far from the sea... it will play free to the public in the Benton High School auditorium. Here's betting that this public screening of the film will be the only one for hundreds of miles.

Free local screening
On October 26th, from 6 to 9pm, Benton High will be a hub of discussion about ocean resources, especially smart and sustainable attitudes toward our ocean. From 6 to 7pm, a gallery walk will take place in the hallway leading to the theater. Marine Biology students who have been studying these issues will present displays and talk with guests informally about topics that bring these issues directly to the "table level" in our own community. Our guests will also leave with practical tools in hand to make smart decisions about seafood. Pamphlets, pocket guides, bumper stickers will serve to remind well after the film ends. The End of The Line has a runtime of 82 minutes and will begin at 7pm. After the film, students will again be available to discuss individual topics in the galleryway until 9pm. Concessions will be available. Hey, its a movie. Movies require popcorn, right?

The screening of the film is sponsored by the Saint Joseph Marine Institute (Marine Biology program) and the Saint Joseph School District. Thanks to district officials who have long sponsored innovation in the classroom, this community event will be offered free of charge. Thanks, Dr. Dial. My students thank you, as will any members of our community who are touched by this experience.

To help spread the word about this free community event, feel free to download a copy of the full-size poster here and display in your school or place of business. Also, if the topic of the world's oceans is a favorite of yours, you might consider following the official Twitter feed of the SJSD Marine Biology program.