Disrupting Class Outside the Classroom

Probably out of context from the entire article, I read this excerpt from the following post: The Role of Educational Leaders in Implementing Web 2.0 from Around the Corner-MGuhlin.org by Miguel

Disruptive technologies--exemplified by the ability to publish at will in text, audio, video formats or any combination of those--enhance our freedom of speech, freedom to assemble in virtual communities. Social networking tools like MySpace (or Facebook and Bebo) and YouTube grant freedom of speech and assembly to the masses in a way that the American Revolution never could. For this reason, disruptive technologies that connect people to each other are the greatest threat to the powerful who have traditionally controlled the means of publication. Unfortunately, that includes our schools. 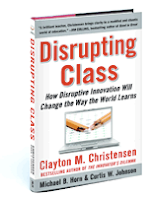 A while back a friend of mine asked that I read "Disrupting Class" by Clayton Christensen. Having read the expert above brought me back to the thought of this book, so I guess I will make this one of my readings for 2009. (podcast)
What this concept of disruption says to me is that the "few majority," the "leaders," and the "selected few," are no longer dictating what gets desiminated down to the learners. That being said, average joe's are creating their own content and publishing. Just take one look at the iPhone Apps store. Many of those are being developed by small mom and pop shops or individuals who have purchased the developers kit and have created amazing offerings. Still large companies offer their own apps, but for the most part, disruptive technologies have opened the door for fresh and new ideas from folks like you and me. The same can be said for classrooms, teachers and students. Much of what is to be learned, students can find on their on online and probably using YouTube in a video format. However, schools still spend millions on text book adoptions from large publishers. Yet, the pioneers and disruptive teachers and students, find ways to create engaging projects and instructional content using much of the Web 2.0 tools that are available at no cost. Not to long ago, I followed a 4th grade class sharing a science disection project via Ustream. The students were sharing information with their virtual audience and their classmates. It was very disruptive and very powerful.

It is my opinion that although schools will filter and prevent certain social media and Web 2.0 tools to pass throgh their district firewalls, students and teachers will still make available these types of learning tools for their students and colleagues. My guess is that it will not be an institutional adoption, but rather a learning opportunity that extends beyond the school day and beyond school technology tools. I haven't read the book yet, so that will be my first reading of 09, but I would venture to state that a disruptive class will not be the same as a disruptive classroom. Rather, a disrupting class will be a text message from one student to another, a YouTube video to share a history assignment, a MySpace post asking fellow students for their thought process on solving a math equation or a Twitter post to share a link to their digital storybook.

I will be interested to follow how teachers embrace and utilize new technologies and new disruptive Web 2.0 resources in and outside of the "classroom." I have sat through so many sessions where pioneer bloggers and tech savvy techie-types have had colorful discussions and arguments about opening up the floodgates or at least allowing their classrooms to access Ning communities and YouTube content, only to be confronted with a resounding no due to all the obvious reasons - student safety, privacy protection, access to inappropriate materials, and the list goes on. Members of Classroom 2.0 have embraced this disruptive notion, but I think it will be embraced by even more teachers that simply search, browse and check email.

I predict that 2009 will be the narrowing of more practical Web 2.0 resources for teachers and learners. I also believe that teachers will embrace them more readily, not just the early adoptors. I also predict that there will also be a larger mass of educators flocking to social communities, particularly Facebook and (WeAreTeachers) to connect and gather. Okay, maybe not WAT, but this was a shameless plug to try and make that happen :-)

Again, I don't think this will happen institutionally, but rather by way of disruptive behavior, hence creating a disruptive class with disruptive technologies.

The future is now. Class is in session.