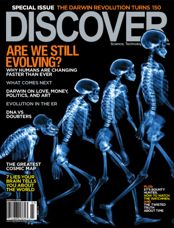 I found the Discover March 2009 article "Are we still evolving?" by Kathleen McAuliffe very interesting. The article discusses evidence for human evolution that has taken place over the past 50,000 years. As an educator I found it particularly interesting when the writer discussed the possible evolutionary basis for ADHD. The notion that ADHD and the patterns of behavior that are associated with the disorder, could have at some point, provided our ancestors with a survival advantage is speculative. Educators and psychologists have raced to identify, diagnose and label students' behaviors, especially those that are not conducive to functioning in a traditional classroom setting. In many cases this has led to stigmatizing student behaviors (dyslexia, ADHD, autism, etc). I found it refreshing and intellectually enlightening that some of these disorders and disabilities probably can be understood in evolutionary terms. The student behaviors that we label as undesirable and difficult at some point could have been an asset to our ancestors.