Flatten Your Classroom with the Eracism Project™ 2012 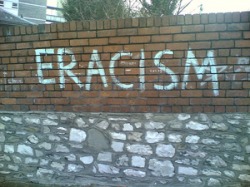 Fact based debate is a very essential skill with students who often equate the term "debate" with argument.  The Eracism Project™ : A Flat Classroom® Project envisioned by the winning student team from the 2009 Flat Classroom Conference held in Doha, Qatar. Their concept was to hold debates using Web 2.0 tools to improve cultural understanding.

Schools selected for the Eracism Project™ 2012-2 will be asked to enter a 4 person debate team, with the remaining students in the class being researchers around the topic,

"Global management of natural resources will cause conflict between cultures"

The initial debates will be held asynchronously but in what organizers are calling a "simulated synchronous" environment with the final winning teams debating live in a virtual world.  This project was first carried out in 2009 and was run again in March 2012 and will now start again in September 2012.

We welcome applications NOW from teachers and their classrooms around the world. We also need judges and volunteers to help with debate coaching. To apply for this project as a class or judge or volunteer or request to be involved in the teacher information meeting, please complete this form.

Classrooms in Upper Primary, Middle and High School are encouraged to apply (students of age 11 and above). Organisers will create two strands in this project based on demand.

Application deadline is September 24, with announcement of project classrooms by Friday September 28, 2012.

The first teacher online meeting will take place near October 1, 2012. Actual date and time to be advised.

This project has a planned start date of October 1, 2012 with debates beginning October 15 and  concluding with the final debate held in a virtual world (and to be streamed live) in late November/early December 2012.  Schools applying must specify their school holiday dates so that they can be best placed in the project on the debate grid.

This will happen at the school level as classrooms research the topic and practice debate at their local level.

Students will use VoiceThread to debate with each round taking approximately one week.

The top two teams will debate live in a virtual world with the debate streamed live on the web for students and educators around the world to watch.

Students and teachers will reflect on ways to improve the methods for  global debates. Process
Due to the asynchronous components used, Eracism will use a hybrid debating style that is based on Conflict or Initiative Debating.

Each debate will be adjudicated by 3 judges and the winning team advances to the next round.

Most of the debates will be carried out on VoiceThread with the final debate being streamed live in a virtual world.

Thank you to the sponsors of this project: Voicethread, Wikispaces, Blackboard Collaborate.