CAUSE OF THE FRENCH REVOLUTION

The causes of the French revolution are so complicated, that it debate still it taking place regarding this but it has generally be excepted that the root causes of the great revolution lay in the ancient rogue , that is the old order.

SOCIAL STRUCTURE- French society had been divided into three estates of order for long time. This system was based on custom and traditions but more important it was also based on social inequality which were sanctioned by the force of law.

ROYAL ABSOLUTISM-The eighteenth century France was in the theory and absolute monarchy. Thanks to the effort of Levis 14th, absolute monarchy was a reality. France had no parliament through it did have and estates general comprising of the representatives from each of the three estates but it was convened the last time in 1614. The French administrated of the country through a bureaucracy, it was large, corrupt and inefficient. Thus all the powers were centered in the hands of the monarch.

LAW- There were 13th distinct regions in France before 1789 and each was under the jurisdiction of a parliament. Each Paralama contained between50 to 130 members. They were the local judges and legal elites. They also served as public sensor and sometimes were responsible for fixing the price of bread. They were hated by almost everyone including the king.

But the king also had his royal agents known as intendance. The post of intendances was created much earlier to help curb the power of nobility during the period of Levis 13th. But the intendances were now become known for their habit of arbitrary taxation and the arrest of the peasantry. It is clear by now that the legal condition in France was not up to satisfaction and it became a major fool of operation.

ECONOMICE CONDITION- the French were economically strong than their counter parts in other states. But before 1789, the economic conditions became weak. The harvest was poor. The peasants were bounded to contribute more taxes. Therefore, they had not sufficient resources to invest in agriculture whereas the landed aristocracy was tax free but they did not desire any investment in the agriculture sector.

The state economy had by 1789, become bankrupt. The country could no longer pay its debts that were all the result of war.

THE ROLE OF ENLIGHTNMENT/PHILOSOPHER- there are a larger debate over the role of philosopher in French revolution. This debate begins with the statement of Napoleon that the revolution would have not been possible without Rousseau. Infect, before 1789, there were a number of writers and scholars and norms and had been making a fervent appeal of change in the different domains of socio-political lines.

There are so many philosopher who put live question about the French revolution in the citizen through the writes the book and the novel. For example: - Montesquieu, Voltaire, etc.

In view of such works and views of the above mention philosophers, it was believed that, they played a greater role in the out brake of the French revolution. But at the same time other views also came forward dining  the role of philosophers the main arguments put forward by them may be enlisted as the following……

{1}. At the most they may have advocated for a change which does not mean the revolution

{2}.some of the philosophers like voltage was advocating for a constitutional monarchy as prevalent in England.

THE IMPACT OF AMERICAN REVOLUTION- the American Revolution plays important role in the French revolution in some ways or the other. The French troops fought in favor of America and this participation increased the debt of France which was already alarming. Bit more important is the fact the American revolutions proved the possibility of the change for a better world by human beings in this way the American Revolution satisfied the enlightenment philosophy of the idea or progress on the basis of progress on the basis of reason, question and scientific way. Thus in this way the American Revolution in flunked the collective psychology of France. They now develop the habit of thinking in a manner that change in France is required, change in France is possible we alone can do it and thus this mode of thinking served as a thrust for the revolution.

IMMEDIATE CAUSE OF THE FRENCH REVOLUTION

The conditions in all spheres of life in France was deplorable and beyond any remedy particularly the economic state of affairs was alarming. The physical deficit was roaring high and high so it become mandatory for even the most in famous ruler Lui-16th to considered the situation so he appointed target, Necker and clone one after  another to get rid of this condition but under the influences of his Quinn repressing the mindset of the novelty. He turn on the proposal given by his ministers. In 1787Brienne was appointed the finance ministers. He like his pridisesarce again requested for taxation on all and he also proposed a new stamp tax the assembly of elite turn on this proposal but king dissolved this assembly and send the proposals to the Parlama of perish to register such proposal the Paralama rejected to register the proposal assenting that the essayed general had alone the write to introduce new tax. People welcome the move of Parlama . the king had Sukuma to the presser and finally he called the meeting of estate general on 05 may 1789. The section of state General was called it was during this section a conflict arose among the three estates which proved to be commencement of the great revolution. 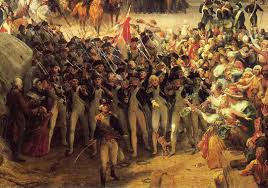 the link of video of cause of french revolution