Gaming and Education - Rethinking the Rules

We decided to explore these articles because of a recent announcement by our board to investigate and pursue the opening of all-boys schools (see article). Our board sees this as a means of dealing with the falling grades and general behavioural issues of boys in our schools. We're sure that this solution will work for many boys, we definitely hope, but we can't help but think about the connections which have been made between gaming, learning, and boys and whether a rethinking of how we see the institution of school and how we teach may not offer a complimentary long-term strategy: one that would also better prepare our kids for the careers, jobs, and socio-political mosaic of the future.

And in no way are we ignoring females. Games are now designed for a variety of platforms (computers, mobile devices, and television) and make up a big and growing market: and the "growing" end of the market is made up of games aimed at young children and tweens. In fact, the new arenas of socializing, playing, communicating, and learning - the social networks, social media, and gaming, are becoming increasingly genderless in their rate of participation...now how they participate, that's a different issue.

Many of these games are marketed as educational, but Cooney Center's 2008 report does point out the difficulty for educators, caregivers, and parents in gauging which are the best learning tools and how to use them. The following articles provide a platform and expert guidance on how to frame gaming in education. 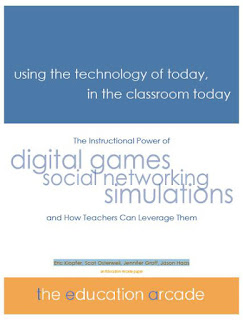 This paper from MIT's Education Arcade actually has a more meaningful sub-title (it was just too long to include in the header) - The Instructional Power of Digital Games, Social Networking, Simulations, and How Teachers can Leverage Them.

The report starts of with a nice kicker - What is good learning? And it immediately outlines a few points any educator and school administrator would love to witness in their respective schools and boards:


…students collaborating and discussing ideas, possible solutions… …project-based learning, designed around real world contexts… …connecting with other students around the world, on topics of study… …immersing students in a learning experience that allows them to grapple with a problem, gaining higher-order thinking skills from pursuing the solution…

And then the kick...students are doing these things regularly outside of our classrooms.
This report also offers some amazing numbers:


...more than 45 million homes have video-game consoles (Feller, 2006). Over 154 million Americans play video games (that’s about half of the country’s population) (Emrich, 2005). In a given week, the average eighth-grade boy will play video games for about 23 hours, while the average girl will play about 12—that’s even more time than they spend watching TV (Dawley, 2006)

This article by Katie Ash, in Education Week's Digital Directions, looks at how the gaming industry is exploring "gaming girls" and starting to develop a better understanding of what engages the female gamer. And more importantly, researchers "are beginning to figure out how programs that put girls in the driver’s seat of game creation influence their relationships with technology and other STEM [science, technology, engineering, and mathematics] subjects".

But the article does state that while many more women and girls are now playing digital games, few are actually involved in the business of creating and designing them. The article goes on to position that this absence of females in the development end of gaming is something that can be best managed at the Middle School level. While those who make the game platforms and those who produce games are increasingly interested in both girls and women, Middle School is seen "a critical period for identity formation" where teachers and counselors can help guide them in a direction which they may not be "socially" inclined to pursue.

And the "social" is key and undervalued when considering a path in technology or other STEM:


{Prof Maria] Klawe, who has conducted research on gender and gaming for more than a decade, says that although girls and boys both enjoy playing games, girls generally interact with games differently and are attracted to different aspects of gaming than boys are “One of the things we’ve found in our early study is that girls are more likely to do something with a computer game or video game if they think it has a worthwhile purpose,” she says. Generally, girls also engage in game play for more social reasons than boys, says Klawe. “With girls, it’s much more a question of finding a game that’s fun to play with your friends.” 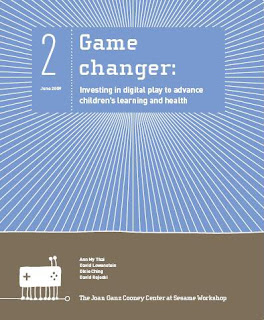 "A generation of youth has grown up with games. Yet we know very little about what they are learning playing these games." (Kurt Squire, U of Wisconsin)

This report explores innovations from both the commercial game industry and academic gaming development labs, and examines how digital games are being integrated in specific learning settings. It argues that digital games and media are now an intricate part of our children's social and learning culture, but that current approaches to negotiating, managing, and bettering the educational (and child-health) landscape are institutionally impeded from leveraging this vast wealth of digital media.
Like the other reports and articles listed here, the authors (Thai, Lowenstein, Ching, and Rejeski) of Game Changer highlight the foundational and 21st-century skills which children can learn from digital games:
But this report takes digital games beyond the institutional confines of education and into various contexts of lief-learning, in particular the effectiveness of digital games in improving children’s health — from physical fitness and health promotion to disease management.

Thai, Lowenstein, Ching, and Rejeski emphasize the need for strategic investment at the administrative and policy level, and that we can no longer continue to look at technology as simply another tool to incorporate into traditional, present educational models:


The universe of digital learning is too large and too multidisciplinary to fit into old models of research and development. 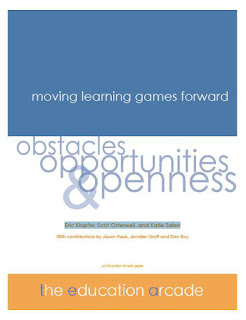 This white paper explores the evolution and application of learning (or educational) games. Learning games reach for the "acquisition of knowledge as its own end and foster habits of mind and understanding that are generally useful or useful within an academic context". The authors associate learning games with a variety of activities and contexts:


Learning Games may be associated with formal educational environments (schools and universities online or off), places of informal learning (e.g. museums), or self-learners interested acquiring new knowledge or understanding.

Education Arcade makes sure to clearly separate themselves from the edutainment models of the 1990s, with a new vision for learning games that are not only both engaging and educational, but convey these as wholly integrated parts, unlike the games of the edutainment era were a fragmented mix of discrete educational and entertainment components.
One of the key discussions in the paper is the big obstacle to the application of gaming in education and classroom activities - the two seemingly separate contexts of the gaming culture and the school culture. Education Arcade lay it out as a question of introducing a more exploratory "spirit of play" into the school:


If the spirit of play sits uncomfortably in too many classrooms, the logistics of game-play are even more problematic for schools: the need to march the students through mandated curricula leaves little time for supplementary activities; the effort of getting a classroom of students into a computer lab for the typical class period all but rules out activities of any length or substance; and, the very real concerns of teachers when confronted with new and unfamiliar technologies create an environment in which games just aren’t likely to be adopted, or when they are, to be used in limited and unproductive ways.

But the design of good games, educational and learning games, does not preclude the need to address and meet curriculum expectations, and neither do the activities of exploring and playing eliminate learning.
The thread of issues and themes which runs through all these articles focus on the same dilemma which educators and policy makers face with the integration of social media into classroom activities. It's no longer an issue of simply integrating technology tools into our current models, we need to rethink the rules and foundation of what we do and how we do it...and it's not a question of we have technology so lets use it, it's a question of eveolving with our students and children and remaining a relevant and key component of their learning and maturity.

It won't be easy to take the first steps but it's a question of necessary change above all else.

Just a few other valuable items which we think would be worthwhile to look at: