I thought there was nothing more I could know about Bruce Springsteen especially since his world is already evoked in his songs. Listen to a Springsteen song and you see a hardscrabble, working class Jersey boy kicking it around in garage bands; sitting on the hood of the Chevy with a long haired, barefoot girl wearing bell-bottoms and a lost, moony gaze on her face; beers with the boys after a shift at their dead end job at the tire factory, all of them griping about the boss or debating a football game.

Recently, however, I discovered new things about Mr. Springsteen, such as the fact that he is, like me, Italian/Irish. His father, like mine, is the Irish one and his mother, also like mine, is the Italian. I never would've guessed an Irish ancestry because the name Springsteen hardly connotes one (the Vanity Fair article tells us that there's a great-grandfather named Dutch Springsteen, but fails to tell us anything more about the origin of the name). The Springsteen family tree is speckled with mental illness and alcoholism and Bruce describes his hard-drinking father as "a bit of a Bukowski character." It's hardly surprising that there's alcoholism in the Springsteen family tree; after all, there's Irish in it -- and I say that as someone with lots of Irish in her own.

My dad had more than mere Irishness in common with Springsteen; dad was also a straight-up Jersey working-class man of the sort you'd hear described in any Springsteen lyric. Dad grew up in Patterson, NJ, in one of its scrappy ethnic neighborhoods, and at 16 he dropped out of high school, ran away from home and joined the Merchant Marines (he lied about his age to join and forged his father's signature). He married young, learned a solid trade with which to support a growing family, thus becoming a butcher (and like a true Springsteen hero, he was loyal to the fellows in the meat-cutters union).

That growing family just kept on growing with a baby a year -- one after another, after another -- finally totaling at ten kids within a span of eleven years. He drank beer, never wine, and you can bet it was American beer. He and the boys drank at a small, plain bar with one dart board, a tv that was continuously tuned into one ball game or another, and a bartender who'd give you a wink when answering the phone and telling your wife nope, you weren't there. Though Dad did not have a high school diploma he knew American History as well as any graduate student and he read voraciously -- favoring the fiction of Norman Mailer and Truman Capote and the history books of Arthur Schleshinger and Will and Ariel Durant.

If Springsteen's songs are about the underappreciated merits and dignity of the working class hero then they are about my dad. 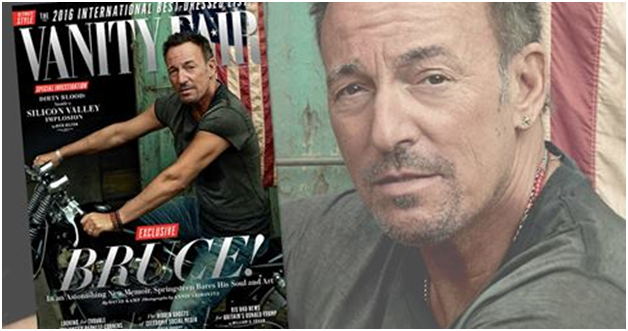