Kids 9 - 16 and Writing. A UK Report on the Role of Technology 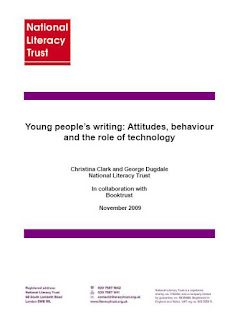 Young people and writing: Attitudes, behaviour and the role of tech..., by the National Literacy Trust, looks at young people's views about writing in the UK, with a focus on exploring "what type of writing they engage in, how good at writing they think they are, what they think about writing and what the role of technology is in young people's writing". In term sof technology, it explores writing with respect to mobile phone ownership, having a blog and having a profile on a social networking site.

The report's results are based on an online survey in May, 2009 of 3001 pupils aged 9-16 from England and Scotland. Here are some of the key findings:
The report ends off with a statement which is echoed in many studies exploring this topic - school curriculum needs to capture and use the writing forms and mediums which young people now enjoy and engage with in order to demonstrate that writing is more than a classroom activity...it is an essential life skill.