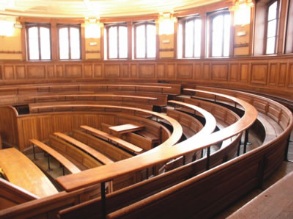 "I call everyone 'Darling' because I can't remember their names."
-Zsa Zsa Gabor

A few years ago, my fledgling kid brother walked into his first class at Central Michigan University. It was in one of those stadium-sized lecture halls—you know the kind: a wall of vertical-sliding chalkboards and a battalion of green, first-year students.

After everyone was settled, the professor introduced himself; then he pulled out a Polaroid camera and proceeded up the steps and down each aisle, snapping photos of every face he passed. After taking the photo, he handed it back to the student, along with a sharpie, and asked them to write their name along the white margin. Then he collected them without explanation.

When the class met again at the end of the week, the professor stood at the doorway and addressed each student (all 60 of them) by name as they entered and continued to do so until the end of the semester. I’ve never met the man, but his tenacity continues to impress me.

In addition to writing for Marygrove College, I’ve also spent the past few years as an adjunct at one of the area’s community colleges. When I’m not in class, I’m in a shared office where a rotating roster of instructors cloister up during the few minutes before class and either prep, grade, console or gripe. I can’t count the number of times I’ve heard colleagues admit that they don’t know any of their students by name (the average class size is 28 students). Some are red-faced as they say it, but for others it’s a fact of life: “Students come and go.” Most adjuncts are underpaid and overworked, so it makes sense how they got here, but it never fails to dishearten.

It strikes me that even if it takes a few weeks to get them down, spending the time to know our students by name—regardless of how many classes we have—is one of the most important, and relatively effortless, gestures we can make.

Not only does this app streamline the attendance-keeping process, it allows you to import your students’ names via Dropbox or email and customize each name with the built-in flashcard function that will put the name with the face—literally.

So when you’re looking out into a sea of unfamiliar faces on the first day of class, relax: Snap a photo and upload it to the app. You’ll never blank on your students’ names again.

If you're interested in reading more of my blogs, you can read them here:  http://onlinegrad.marygrove.edu/blog/.