A review of a couple of research papers which cover the role of Web 2.0 in education from very different perspectives: one looks at school administration and policies, the other at student / youth behaviour and activities. It's quite surprising how the two are still so far apart - how educators are trying to fit Web 2.0 into traditional teaching and learning models, when it's quite apparent that it's becoming a question of us building models and paradigms to accomodate what is not simply a new technology-based expereince, but a new society. 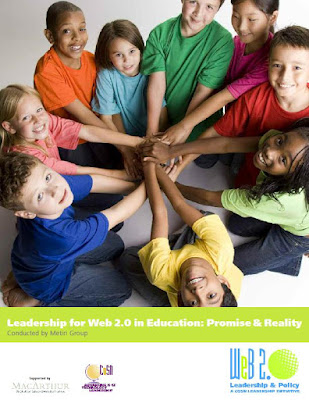 A Consortium for Social Networking leadership initiative report, this study aimed to document K-12 Web 2.0 policies, practices, and perspectives in
American schools. The study focuses on the perspective of school district administrators (school district superintendents, curriculum directors, and technology
directors), with surveys from nearly 1200 respondents being the basis for the resulting report. This report argues that despite the fact that today's "digital natives" are socializing, playing, working, studying, and learning online (something we've argued all along), school culture and administration have yet to develop a scalable framework that aligns learning to the realities that define our students relationship to digital information and the web.

The report provides some very interesting data. On the good news side, about 75% of survey respondents (US school district administrators) believe that Web 2.0 has a positive or highly positive impact on students' lives, their communication skills and schoolwork. But while these school administrators view Web 2.0 as inherently valuable for teaching and learning, most schools run by them still ban the very tools, and types of applications, which are central to the Web 2.0 experience for most students. This is an antiquated attitude which, to us, seems to intentionally or unintentionally be entrenched in the old association of computer-based entertainment with computer gaming - problem being, as the report states, most of those making the policy decisions are passive users of the social web, and simply don't understand that a half-hour on FB or Twitter can be the equivalent of a one hour group project meeting in the library. (oh, and by the way, gaming is now also seen as a rich paradigm for learning, which we will discuss in a later artcile). In short, despite the grand lip-service paid to the perceived value of Web 2.0, most schools and its boards either don't know how to implement a real strategy for change or are unwilling, leaving K-12 education's capacity to innovate weak and outdated. 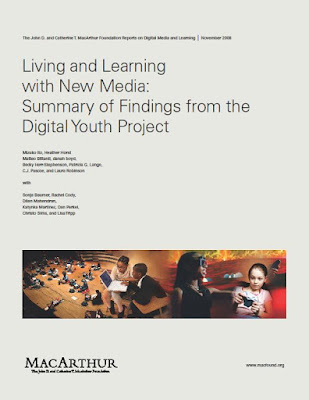 University of California researcher Mizuko Ito and her team of researchers interviewed over 800 youth and young adults, and captured a staggering 5000 plus hours of online observations, focusing on the question of youth media use - becoming the most extensive U.S. study on the topic. The the three-year ethnographic study was motivated by two primary research questions:

1. How are new media being integrated into youth practices and agendas?
2. How do these practices change the dynamics of youth-adult negotiations over literacy, learning, and authoritative knowledge?

The study found that youth use these new media online spaces (social networks, social media) to extend their friendships and interests. Youth actually make us of these new spaces and networks to grow, explore interests, and find information that moves well beyond the boundaries and levels of access which they find at school or in their immediate communities - as expected, the physical space is no longer the sole primary experience in the socializing, learning, and maturity of youth. And the study also points out that these new communication avenues have give youth a new platform to define self, where they "find opportunities to publicize and distribute their work to online audiences and to gain new forms of visibility and reputation".

With the ability and power to extend their sphere of friendships and interests, youth have more control over the boundaries which define their activities and how they socialize and learn. The study found that youth are quite open to sharing their ideas and creations online and getting feedback from peers. The constant flux and change of these new online spaces creates a context where trial and error is replaced building and socializing (e.g. creating a video), and the building invariably involves a lot of self-directed and group learning. All of the sudden an activity which would be seen as a task in a classroom environment is an treated as an experience when "online" with peers:

"New media allow for a degree of freedom and autonomy for youth that is less apparent in a classroom setting. Youth respect one another’s authority online, and they are often more motivated to learn from peers than from adults. Their efforts are also largely self-directed, and the outcome emerges through exploration, in contrast to classroom learning that is oriented toward set, predefined goals."

Another key "learning" point highlighted by the study is the issue of expertise and authority, specifically as it applies to what they refer to as "geeking". Those who join specialized knowledge groups (e.g. programming or web related interest communities) which are comprised of both youths and adults enjoy a very different status in comparison to the student-teacher relationship they experience in class. This becomes especially salient when the youth may in fact be treated as the resident expert during an online exchange with an adult. And how many of us teaching computers and web design have experienced that dreadful moment when sitting in the front-row is a ruby-on-rails expert who can tell you how to set up a service like Twitter...

The study concludes by outlining some of the implications for educators, parents, and policy-makers who must negotiate future generations of users who now grow-up online in these new media spaces. One conclusion the study draws is that social and recreational use of new media is actually enhancing the learning experience. The authors state that,

"Participation in the digital age means more than being able to access “serious” online information and culture. Youth could benefit from educators being more open to forms of experimentation and social exploration that are generally not characteristic of educational institutions."

When we compare this to the data found in the previously reviewed study, Leadership for Web 2.0 in Education: Promise & Reality, which found that most schools and administrators still see a clear split between good Web 2.0 and bad Web 2.0 (insert most anything students really enjoy), it becomes quite clear we're really not moving in the right direction.

The active participation in social networks and new media sites has had an immense impact on peer-based learning in youth culture and communities. In fact, when it comes to using new media youth learn more from sharing activities with their peers as opposed to sitting through adult-based instruction. But the report does state that in the context of the new media adults can still have tremendous influence as role models, more experienced peers, and establishing and monitoring learning goals - it's a case of leveraging the two to get the best out of the student.

Let's finishes off with some comments made by the researchers regarding a new role for education:

"Youths’ participation in this networked world suggests new ways of thinking about the role of education. What would it mean to really exploit the potential of the learning opportunities available through online resources and networks? Rather than assuming that education is primarily about preparing for jobs and careers, what would it mean to think of it as a process guiding youths’ participation in public life more generally?"

In the end, using Web 2.0 and the new media in the classroom is so much more than just a more current and interactive way of delivering information and a lesson. It really goe to the core of how as a society are changing the way we learn, interact, and understand our role in the community.

Comment by Steve Hargadon on August 27, 2009 at 3:16am
Thanks so much for posting these links and the summaries. Awesome!