SPEAKING HIS MIND: Marcelas Owens Speaks Out for Healthcare


History was made last Tuesday when President Barack Obama signed the healthcare bill into law.

Marcelas Owens, an 11-year-old from Seattle, stood right next to the President at that historic moment.

Owens got to be a part of this special day by going through something very hard: his mother, Tiffany, died in 2007 after her heart condition, pulmonary hypertension, caused the loss of her job and with it the loss of her health insurance and home.

After her death, Owens felt he wanted to speak up as well.

“My grandma told me that even if you’re nervous you do it anyway, and that you have to be able to not be afraid speaking what you have on your mind.” 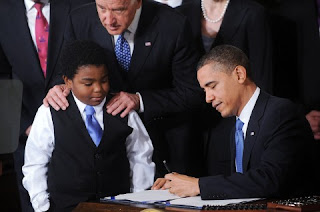 That advice helped him when he was in Washington, D.C. on March 11 where he stood before Congress to tell what happened to his mother in hopes of getting the healthcare bill passed.
The bill was voted on Sunday, and it was late Sunday night when Owens got the good news. Not long after that, he was on a red-eye flight to Washington to attend the signing. He had been invited by Majority Leader Harry Reid.
“It was really exciting. I didn’t know the bill was going to pass that fast!”

Owens wore a suit as he watched the President sign, and his blue tie matched Obama’s. Was this planned?

“No,” Owens said. “Someone that worked there picked it out for me!”

Becoming president is something Owens wants to do some day. It’s either that or become a pro basketball player.

By Wednesday noon Owens was on a plane back to Seattle. The trip flew by fast, but he had favorite moments – meeting the President topped the list, but he also liked the Washington, D.C., yo-yo that Obama gave him as a souvenir. 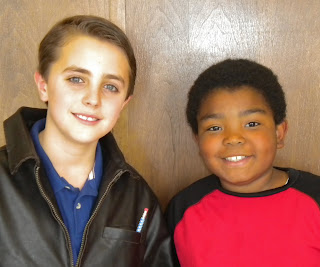 For Obama, the bill passing was just the beginning. He still has a lot of work ahead as he prepares to tour the country to promote the new bill. Owens has more work to do as well, as he continues to speak out -- and, of course, there’s school. But he is up for all of it. “I’ll do whatever it takes,” he said.
He looked forward to the celebration that was waiting when he returned home, and felt very good about the trip and this week’s victory for healthcare.

“This meant a lot because my mom was working so hard for it and she didn’t get a chance to finish it.”