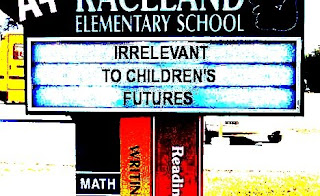 Information has become decentralized. It is no longer "owned". Here are two examples of how information used to be owned:

1- Major broadcasting companies (and record labels/radio stations) used to own information because they controlled what would be watched and listened to because, basically, there were NO options. In the 1970's when I came of age (as did Chris Anderson) the majority of us watched the same TV shows. There was no option for viewing in a format other than TV until VCR's came along. But even then there was a major limitation of freedom of choice. We also all listened to the same music because the music we 'knew' was the music on the radio. There was no choice for listening and the TOP HITS were decided for us.

2- Teachers used to own information (or at least we allowed this perception to linger for way too long) in the sense that they were "trained" and "knew" the content. Then teachers "delivered" the content "to" the student. Students were supposed to be grateful for this altruistic transmission of information. To a large extent, early on, there was some truth to the dichotomy between the 'learn-ed classes' (teachers/scholars) and the 'unlearn-ed masses'. There were few options beyond school besides multi-volume encyclopedias and libraries. But there, too, someone controlled the information. Publishing companies decided what got published. Those were the books that wound up in libraries. Same for encyclopedias. There were few OPTIONS. And teachers were respected for being the "knowers" largely, again, because there was little choice in the matter.

What does 'Best' or 'Top Ten' mean anymore, anyway when there are tens of thousands of well written articles, blog posts, musics, etc. in every conceivable language? And how can any self and student-respecting teacher claim to 'know everything' or at any rate be the 'only one' who knows. Information is information and it can be gotten from multiple sources and quickly. To be sure the experience can be more dynamic than a static explanation of a thing (as with a great teacher explaining a thing). As an example, why discuss the nuance in Thelonius Monk's playing when one can call up a You Tube video of him playing and let students see for themselves??

Maybe the new buzz words should be Relevance and Authenticity. When it comes to information, what's relevant? And how authentic is the information? In other words, how close to primary sources are we getting so students can experience "the thing itself". Major Broadcasting companies acted as a filter for information. They delivered what they (a group of men?) chose to deliver. And we digested it. Same thing happened in school. Teachers taught from textbooks. This acted as a dual filtering system since many inaccuracies were allowed to fester in textbooks of old and many teachers took the point of view presented in the textbook.

So, back to it. If a student pursues his interest and achieves her best education outside of school- where does that leave Education? Teachers? It all has to do with relevance and authenticity and choice. Education systems must adapt otherwise the tired saying "school s@cks" will be increasingly relevant to the subjective experience of students because, to interpret the saying, it means Education (schooling) is out of touch and irrelevant. Which it is, actually, for many students right now.