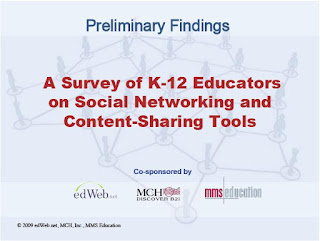 edWeb.net, a social networking site for educators, has just published the preliminary findings (never quite sure what that means) of a survey of K-12 Educators on social networking and online collaborat.... The online survey had 979 total responses, seems like a high number but it's actually a very low 1.4 % response rate of total members available to respond. But in terms of capturing general patterns, I think it's still a useful number of respondents and kind of represents the typical school profile, this is the response breakdown: 59% teachers, 14% principals, and 26% librarians - the last one is kind of high, but librarians do tend to be more responsive to information gathering exercises. 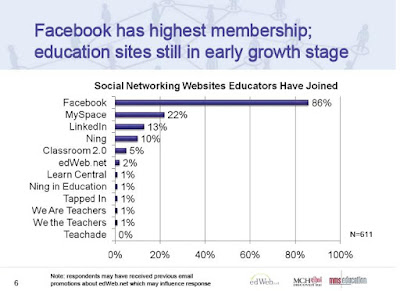 Here's a review of some of the preliminary findings:
As I stated above, I'm not sure what they mean by "preliminary findings" but I do have to say that when I first discovered the survey I was expecting, hoping for, something very different. At this point I think we've had enough reports, surveys, etc about whether we're using Web 2.0 and who is using the new technologies. We're using them, some more than others, but I would really love to see some studies focusing on how we're using them, how students are responding, the [negative] role school and district policies are playing in the integration and use of Web 2.0, and the student and Web 2.0 (so many of the reports have been all about educators and Web 2.0, how about the changing realities of learning and what education and educators need to do to remain central to students learning).
I'm putting together a collection of electronically available studies focusing on Education and web 2.0, this will be included and hope to make the resource available soon.