"The more I practice the luckier I get." Mindset - Carol Dweck 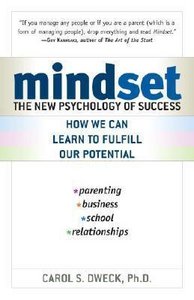 Psychologist Carol Dweck has given the educational community one of the most positive educational concepts yet to be developed – mindset.  Like many good ideas it is deceptively simple – but the implications for schools are profound.  Quite simply, mindset is the belief that ability is not fixed – that people can acquire new skills through targeted effort and practice. Simple.

We accept this belief in sport all the time – we are all familiar with the story of basketball hero Michael Jordan who was dropped from his high school varsity team and wasn’t recruited by his first choice basketball college.  So he practised ... and practised...and practised...until he became Michael Jordan – rated on the NBA website as the greatest basketball player of all time. The history of sport abounds with such stories. Not everyone becomes a Michael Jordan – but all can improve beyond their initial modest abilities.  We expect our athletes to spend hours in training and practice in order to improve.   Yet when it comes to mental potential and abilities we adopt a different view.

Despite the fact that I.Q. is a largely discredited concept, many children are labelled with a number or  evaluation term – often the result of a single test. This label tends to become a self-fulfilling prophecy . That score dictates the way we see the student – and, worse, often comes to be seen as an accurate reflection by the student himself. This attitude is often expressed by students as “I’m smart” or “I’m not as clever as...”.  According to Dweck this attitude is simply wrong.  Within reason, mental ability is not fixed – just like sporting abilities and physical skills, mental aptitude can be improved.

“People are, to a large extent, in charge of their own intelligence. Being smart – and staying smart – is not just a gift, not just a product of their genetic good fortune. It is very much a product of what they put into it.” – Carol Dweck.   (To see a brief interview with Dweck who explains the theory and provides some of the evidence for it click here.)  Dweck contrasts “growth” mindset with “fixed” mindset. The two world views differ significantly in the way that they respond to the world. This unattributed graphic provides a quick overview: 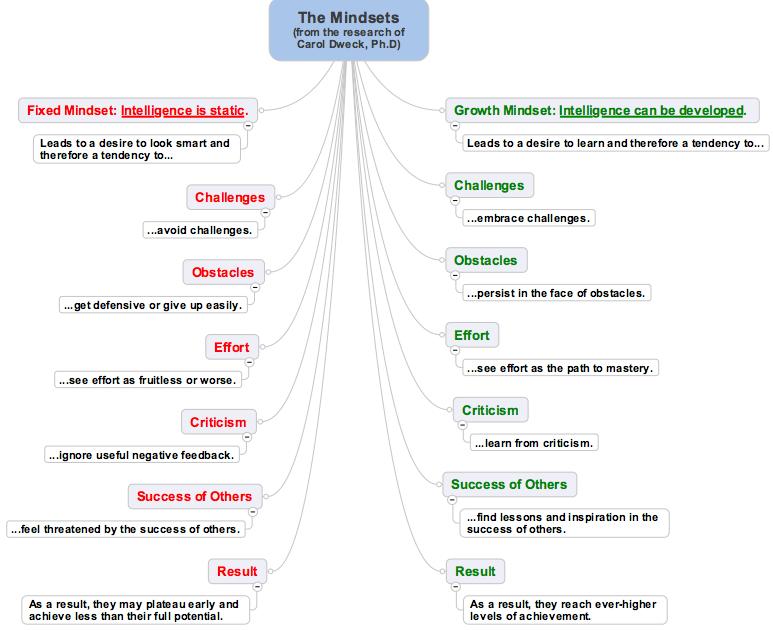 The notion that intelligence itself is not fixed, that it can be improved by effective teaching and that a growth mindset can result in significant improvement in performance by students, should be celebrated by both educators and students.    Central to Dweck’s concept is that schools should stop concentrating on achievement (ignoring the huge side issue of exactly how that achievement should be measured in the first placed) and concentrate on identifying the actual learning that has taken place – and then attributing that learning, not to genetics, but to effort. (So, you scored 87% on the maths test? Did you work hard? No? Well, where is the credit in that?  So you scored 58% on the maths test – when you often fail such tests. Great – you must have worked hard. Where specifically do you think you can continue to improve?)  According to Dweck teachers need to emphasise the effort made by students and concentrate on the improvements that they make rather than their grades if we want to promote self-motivated learners with resilience and self-confidence.  (This echoes the writing of the iconoclastic Alfie Kohn who is scathing about the inappropriate measures of success endorsed by schools- usually done with good intentions.  Kohn maintains that traditional “grading” of student work actually limits student performance – including that of the high achievers.  See the article section of his website for further readingshttp://www.alfiekohn.org/index.php  .)

For teachers in the classroom it is reasonably easy to implement the “growth mindset” approach in the classroom.  Dweck’s book and website (http://www.mindsetonline.com/index.html) offer ideas on how this can be done – but really, it isn’t that difficult – once you are in the right mindset yourself.

So, it seems that it doesn’t matter if it is on the basketball court or in the classroom – student performance level is NOT fixed  – students can all get better at virtually anything – with effort, persistence and self belief.   As the saying goes...   “The harder I practice the luckier I get.”

The quotation used as a title for this blog is attributed to many people – but, after a little research, it seems most often attributed to champion golfer Gary Player.  However, there is an even earlier attribution, ironically  to another golfer - to 1961 PGA golf tournament winner Gerry Barber.