The Treaty of Versailles is the important incident of world history.It was one of the part of Paris conference.It was took place in the place of Versailles due to its largeness.It was held after 1st world war on 28th June 1919.

The Treaty of Versailles grew out of desire for retribution.In brief,Germany's military was drastically cut;it was forbidden to possess heavy artillery,military aircraft,or submarines,and its forces were banned from the Rhineland.Germany also lost territory in the west to the France and Belgium,in the south to 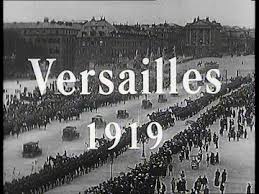 Finally,in the most humiliating clause of the treaty,Germany was assigned responsibility for the war and charge with paying heavy financial reparation for the damages.It was not a treaty ;it was a truce for some years and it was a order that was given by winning countries to the Germany. It led to the rise of Halter and the outbreak of second world war.

Link of  video for this content:-https://www.youtube.com/watch?v=ShRA8HRMR4Q

Link of images for the Treaty of Versailles:http://www.google.co.in/imgres?imgurl=http://www.studygroup-bd.org/...