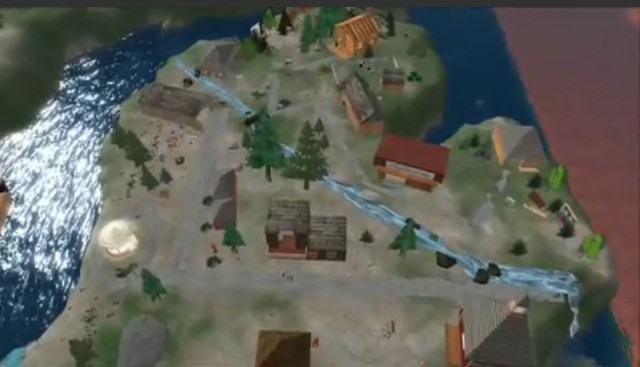 Yesterday I was home sick. It happens to all of us sooner or later, and usually at the worst possible time. Staying home yesterday for a doctor's appointment in the morning (Where they so do not get that you can't use the restroom at will) I was able to kinda/sort able to be with my kids at home.

My 7th graders have building projects going on in ReactionGrid, a PG rate virtual Environment for education and training. I have 3 sections of them in the afternoon and I was not comfortable in justing "trusting" the sub to monitor them. So from my counch at home I logged on the the Reactiongrid with my avatar. The kids were amazed I could be there with them in the virtual world while I was at home.

They followed my directions well . They had to read them in the chat window instead of hearing my voice in the classroom. One of the groups actually got to have a lesson in world by a Kyle who owns the ReactionGrid. He knows his aerspace stuff. I couldn't miss the chance to learn from him myslef. He build an entire assembly to show how signals travel, He had a mic on and I can tell you those kiddos were paying attention. One actually wrote in chat he learned more in 20 minutes then he did all year. High praise indeed from middle schoolers.

Upon returning to school this morning they were all still "geeked" by having a lesson from a "real scienctist" and from a their teacher at home, The sub had truoble getting the projector to work but the kids didn't care as they followalong on their own work stations.

I have to admit I am not a great fan of online classes. They seem to be A..) Watch the video lecture, B.) read the online text, and C) take a quiz. If you are an adult and have some background in the subject matter already-this works ok. I have also read about some success in students retaking a classes this way. But I have never felt it was a great way to learn new information-just not interactive enough ,in my humble opinion.

Using VR seemed a bit different. The avatars were moving around asking questions and there was a real live human behind the those avatars. It was not a static lecture-but rather an interactive conversation. So perhaps I need to rethink how online course can and should be done.

Next week the kids avatars get to put together a rocket assemble by components that are representations of the actual components used by Nasa. Kyle will be there
"In World" with them to explain and demonstrate. The kids were definitely engaged learners!

As this new medium comes on line for education all I can say is: