You are welcome to participate in the project:
European Youth Information Literacy Workshop
in Gdansk, Poland - September 2009


This is the beginning of interaction of various youth countries and cultures in the framework of Internet journalism.
The action of young journalists to promote the values:

The objectives of the project:

- Gaining knowledge and establish friendship.
- Establishing cooperation of journalists on the Internet.
- Start the network of the European Youth Information Agency. (WEB 2.0 tools use)

Group participants:
You are welcome to participate in the one group in the country (4-6 youth + 1 tutor). 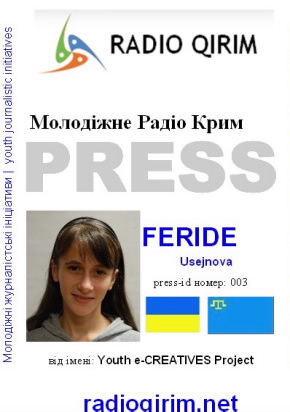 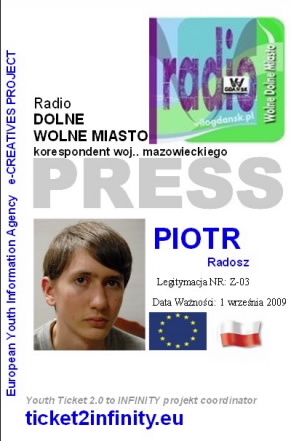 * Country from UE and ISRAEL, EGYPT, Belarus, Ukraine, Moldova, Georgia, Azerbaijan, Armenia
* Participation of boys and girls in the group.
* Groups must have access to the Internet (the project is also a co-web).
* Age of young people participating in the project: 14-19 years (+ 1 adult tutor )
* Participants want to work as a journalists and continue the project on the Internet after end of the project workshop.
* At least one person in the group must know either English, Russian or Polish.

The cost of participation in the project.

* Participants pay 30% of the cost of the travel to Gdansk.
* Other costs (including visa, insurance, accommodation,
board provides the organizer).
NOTE! Workshops will be hold only from the grant from the program Youth In Action Programe.

29 May 2009:
Declarations of the project partners from other countries:
Application forms sent by fax to:
Stowarzyszenie Zaprzyjaznieni w Kulturze,
fax: +48 58 346 3821

2-15 September 2009:
Meeting of the all partners in the Internet preparation of the network mechanisms for the virtual journalistic system. (Network Cooperation Platform)


The social environment of project:

e-ludens SYNDROME
The latest researchs show how young people use the Internet: Most of the teenagers spend hours (2-5 hours a day) on the Internet, and use the Internet in 90% for fun (video games, social networking, chat, downloading files, movies, music ... Are they cyber homo e-ludens ??? Project e-CRAEATIVES intends to promote the creative use of the Internet.

The new strategy od youth of the European Commission - 27 April 2009.
In the project: Mobilizing Activity and Creativity. See: http://ec.europa.eu/youth/news/news1458_en.htm

20-anniversary of the fall of communism in Europe and the unification of Europe.
DEMOCRACY DO IT IT Conference. http://doit-conference.eu
We want to promote the idea of the solidarity (peaceful revolution: Solidarity, the Berlin Wall, The Orange Revolution ...) The reference to the differences of solidarity: not only political, but also
cultural and religious beliefs.

Comment by Hans Feldmeier on May 21, 2009 at 8:57am
Hi Janek, thanks for you information.
My welcome from Germany. I care about Comenius and eTwinning ...
My focus in on Web 2.0 apps in the classroom. Feel free to check some of my sites.
Would love if you join my educational Ning Network Web2Class and add a blog entry about your offers.
Hans