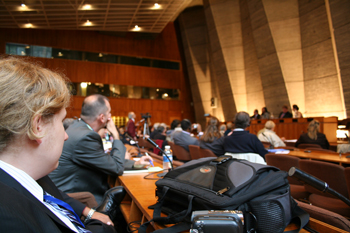 For the last two years, the students in http://ahafilms.ning.com/ has been working hand in hand with the leadership of The Dream Project to create a film about how students can make a difference in communities around the globe. The film, Will You Listen, centers around the eight Millennium Development goals outlined by the United Nations. Students from the AHA class joined hands with ones from a charter school in South Central Los Angeles to create a piece that looks at the world through the eyes of teens.


During the course of the project the students were introduced to a recipient of the Nobel Peace Prize, flew to Honduras to meet the President and First Lady, met teen members of an international rock band who are committed to global change , and flew to Paris to present at the United Nation's international symposium on Human Rights held at UNESCO.


Please join us at AHA Films each week for the next eight weeks as new chapters of the film are released. Also, new chapters that show teachers how to integrate this project into the core curricular areas are uploaded to Digitext. AHA Films is a Multimedia program at Effingham High School.


We invite you to watch this life-changing experience, and encourage you to create a few of your own.
-joe