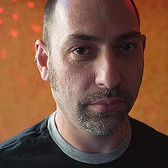 Jack said…
Hi Ken. I was wondering if you have students or educator friends who would be interested in participating in a nationwide SAT Vocab Video Contest @ MIT university. You can view contest details at BrainyFlix.com Please let me know. Thanks!

Ken Stein said…
hola back at you

Kevin H. said…
Hi Ken
This is Kevin, from Western Mass, and I guess I know ya from TTT and through Paul A.
Take care
Kevin

About Me
I'm a social studies teacher at one of New York City's oldest alternative high schools.

It's not the way I thought things would turn out, but it happened that way.

Trailfire is a relatively new entry to the Web2.0 realm and came out towards the end of the spring semester, but its potential was to great to ignore. My students were assigned a large and lengthy web based research project at the beginning of May in my Globalization class. Generally speaking, my students can be classified as "at risk" or as… Continue

The weather in New York City has been a bit off this year. Snow in
April followed by heavy thunder and lightning two weeks later have had
an effect on the telephone lines that run through the backyards of my
brownstone neighborhood in central Brooklyn. It was during last night's
storm that i attempted to try outTrailFire but lost my Internet connection so many times that I just gave up.