And now it’s crunch time! It was a tense moment for all of us. It was the first time for us to join in the Robotics Olympiad. We didn’t even expect to reach the finals and yet here we are. The winner will represent the country in the World Robotics Olympiad in Korea that year. All hopes of the team were on this skinny lad now. It became so quite all of a sudden as our brave grade 6 Claretian student prepares to switch on his robot. We heard the beeping sound as he pressed the green button to turn on the RCX, the brain of the Lego robot. It was a relief for us as it signified that he had placed good batteries. Gently he placed the robot on the playing field, just as his robot was about 6 inches away from the ground, a yellow brick from his robot fell-off and hit the ground first. It was as if time stood still! He attempted to put it back, but another part fell. Based on the rules all parts should be intact, any part from the robot that would fall could mean a deduction much worse a disqualification. The next few seconds was immortalized in the annals of Claret Robotics history and was retold countless of times to old and new robotics team members. The young boy out of frustration threw the robot into the judges’ feet. A loud crash was heard and all the lego pieces went flying in different directions. All three judges were in a state of shock. The young boy went out of the playing arena and cried like a baby. It took several minutes for me and other people including the judges to calm him down.

That experience did not deter the young boy from doing greater things in his life. It drove him to strive harder to be the best that he can be in all other aspects of his life. He went on to become the valedictorian in grade 6, joined the Kilyawan boys choir and passed the entrance test at the Philippine Science high School. When he transferred, I have never heard of him since then.

A couple of weeks ago, I saw a boy on television which looks very familiar. Yes it’s him alright. He became even more taller and good looking but still skinny. The boy’s name was flashed on television, his name: Gian Karlo Rosales Gapul, sixteen years old, Champion in the International Public Speaking Competition conducted in London by the English Speaking Union held last May 9, 2008. Gian bested more than 50 other contestants from 35 countries most of whom are college students who were members in the English Speaking Union in his speech curiously entitled Fish Mucus and Foot Fungus. This time he was very relaxed and added humor to his speech. Finally, Gian had redeemed himself bigtime! In November Gian will be presented with a certificate at the ESU Awards Ceremony at Buckingham Palace by his Royal Highness Prince Phillip the Duke of Edinburgh. Most likely, the Queen herself will be present as well, since the English Speaking Union will make its 90th anniversary this year.

Here is the winning speech of Gian Dapul: 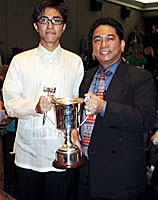 When I was in 6th grade, I hated Mathematics. You would have, too, if you had my teacher. He would drop huge workbooks on our tables and croak, “Thirty problems, fifty minutes.” A lot of these problems seemed unsolvable, so we complained: “Sir, there are no answers to these!” But then he’d reply, “To every question there is an answer, to every problem there is a solution.”Although I’m only sixteen years old and an incoming 4th year high school student, I know that my country has more problems than any Mathematics book. Strangely enough, the answers to some of our problems are fish mucus and foot fungus. These seemingly improbable items are products of what we call scientific research.Research turns our guesses into real knowledge, serving as the sifting pan of our hypotheses. It challenges what we assume, because, as they say, if you only learn from what you ASS-UME, you make an “ass” out of”u” and “me”.
In the early 1800s, someone warned that the streets of London would be filled with horse manure due to the uncontrolled use of horse-drawn carriages. Of course, that never happened. Combustion engines,products of research and invention, replaced horses, and the manure piled up in Parliament instead.While on the subject, few people know that the most expensive coffee in the world is taken from the droppings of the Asian Palm Civet found in the Philippines and Indonesia . The small mammal excretes the coffee berries it eats, and forest trackers recycle the fruity feces to create what is known as Kopi Luwak in Indonesia or Kape Alamid in our country. Research has led to a synthetic process that simulates the droppings’ exotic flavor and quality.
So, who’s had coffee with their breakfast? Well, soon nobody will have had coffee and breakfast if the looming global food crisis worsens.Are you all feeling fine? Well, nobody might be fine for long if some new disease creeps up on us.
Health can be enhanced and life can be extended. The nudibranch, a beautiful, soft-bodied creature unfairly called a “sea slug” — a favorite among underwater photographers for its marvelous colors and shapes — has actually been used in tumor research. Samples of fish mucus have also displayed certain antibacterial properties.
And as the Home Shopping Network would say, “Wait! There’s more.”Certain types of infectious fungi that coat some of your toes here form beneficial relationships that support plant growth. The International Rice Research Institute based in the Philippines continues to develop ways to improve rice growth and help alleviate the current food crisis.New challenges are coming, and they will always confront us. What we need is an army of scientific researchers that will help find the solutions in advance. I want to be part of that army that would cross the new frontiers first.
If only we could make science fairs and contests as popular as the thriving “Pop Idol” franchise. Although I’m not sure if Simon Cowell’s sardonic comments will sit well with my peers. But we need the same hard-hitting passion in research and invention.To conduct research is to be innovative; avant-garde. Researchers are like artists with test tubes and lab gowns instead of paintbrushes and smocks. When I graduate from the Philippine Science High School next year, I want to begin my “masterpiece” and apply for a university degree in Biochemistry.But sometimes, I am discouraged by those who say that a researcher from a Third-World nation is like a Jesuit adhering to a vow of poverty, or worse, like a Benedictine monk observing the vow of chastity. It is indeed a challenge, but it’s also another frontier to cross, for me and many young people like me.We Filipinos are well known for their dedication to service, in foreign homes, hospitals and hotels. In the hotel, I found three Filipinos working there. I want to be one of the pioneers that will make the Philippines known for its excellence in scientific research,as part of the driving force that will expand our horizons towards tomorrow. And I intend as a 1to have a lot of fun while doing it.Going back to my math teacher, I eventually realized that, well, he was right. As he said, “To every question there is an answer, to every problem there is a solution.” We just have to go looking for the right ones. Who knows? Maybe one day we’ll be answering the questions that haven’t been asked yet.

Thanks Gian for making us all Filipinos proud.