I don't remember much of my first day of high school. I guess I probably remember being nervous, somewhat fearful of the juniors and seniors, but most of all a bit awkward about being in a new environment and about four foot tall. Well today I watched my oldest boy, AC, head out into the whole new world of high school and it really brought a lot of tears to see him go off. As he walked off down the street to catch his very first "yellow dog" I was comforted to know that there was a nice blue port-a-potty waiting for him along the way in case he got a case of the jitters or butterflies. Of course, there I was every step of the way capturing every moment on my iPhone camera uploading it to Facebook, well because that's the kind of cool dad that I am. Okay, he would call me a nerd or over protective dad. Needles s to say, I appreciate the compliments. 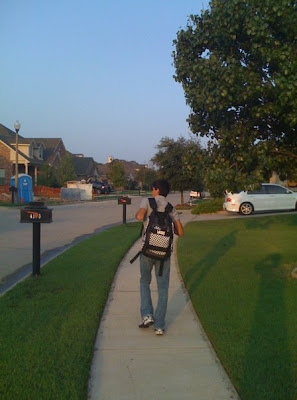 So as he walked down the road, I let out a tear here and there and slowly got off the bus and walked back to the house. (Okay, I didn't follow-him down to the bus pick up, but I really wanted to.) As I sat looking out of my office window with a heavy heart to see him go off to his first day of school, I decided I would wait outside and catch one last picture of his bus going buy. These are the kind of images you keep forever. The first day of kindergarten, the first lost tooth, the first haircut, the first iPhone application downloaded from the App store... you get the idea. As I waited outside to capture an snapshot of his first bus ride to high school, it was in clear site so of course, I snapped the camera quickly and then watched him go buy. 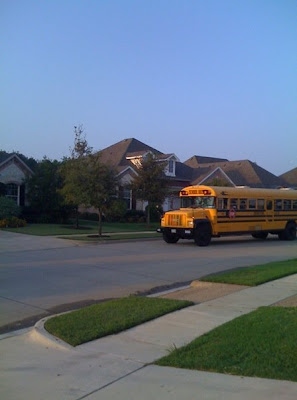 You should have seen his eyes, the face, the HUMILIATION. He quickly glanced over in disbelief. I could here him now, "no... tell me he isn't waiting outside the house taking a picture with his iPhone to upload it on to Flickr." Well of course, that's what I was doing. And in that split second, he took one look and never turned my way to wave or say goodbye. I had officially been disowned on the first bus ride to school. (Remember when your mom dropped you off at school and you asked to be let out four blocks ahead - or was I the only one who did that?) AC did not even glance back to acknowledge that I was there. The one friend he did make on the bus sitting next to him also gave me "the look" and turned as if to say, "I don't know this kid or his father either; I just got stuck sitting next to him."

Needless to say, my tears of sadness turned to laughter and joy. He had arrived and was embracing the start of his independence and lack of understanding as to why I would want to take the pictures and be with him every minute in every class of his first day of high school. But obviously I can't so for now, I'll just wait until he comes home from school and ask him how his day went and what he did in school. And I'll get the typical, "Oh nothing."

Comment by Roxan Cosico on July 26, 2010 at 7:05am
Very nice story John, my son will be going to high school next year so now I know how it feels.